Actually, I Do Have One More Thing To Say To Barney Frank

Actually, I Do Have One More Thing To Say To Barney Frank

Posted by William A. Jacobson Thursday, November 4, 2010 at 09:33am 23 Comments
More Sharing Options 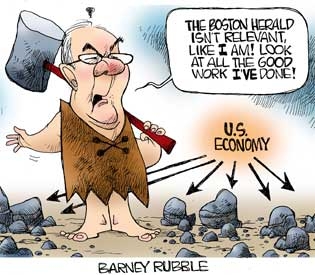 Need I say more to Barney Frank than Margery Egan says today in The Boston Herald:

On election night, he lost my respect as well.

What, does he not own a mirror? Is he incapable of introspection? Has he never seen YouTube’s collection of his best TV hissy fits?

Barney seemed to have forgotten: He won. Big. And he was lucky he did.

The contrast between a nasty, bitter Frank and his grateful, graceful opponent, Sean Bielat, could not have been more stark.

Equally glaring is the double standard Frank enjoys. No female politician could last five minutes as such a condescending, abusive bully. Neither could a conservative. So he gets a special pass because why? Because he’s gay? Because he’s allegedly “whip-smart,” as supporters still say?

Alas, Mr. Whip Smart wasn’t smart enough to see the Freddie Mac and Fannie Mae disaster that resulted in the cruelest foreclosure crisis since the Great Depression. And he’s not enough of a stand-up guy to fully admit his role….

Actually, there is one more thing I can say about the role of Barney Frank, Chris Dodd and other holier-than-thou smartest-in-the-room Democrats who caused the mortgage bubble which led to the economic crisis in 2008, and which continues to haunt the economy.

Update:  Charles Lane at The Washington Post claimed that Sean Bielat was a “sore loser” for not mentioning Frank by name and congratulating Frank in Bielat’s concession speech, to which Bielat has responded by accepting the criticism and stating that it was an oversight.  Lane also called Frank’s speech “rather ungracious, too: self-absorbed, rambling, filled with gibes at Bielat and self-pitying complaints about the Boston Herald’s pro-Bielat coverage.”  So far as I can tell, no contrition by Frank, unexpectedly.

——————————————–
Related Posts:
Wall Street Was Not Where The Economic Meltdown Began
Senator Hedge Fund
The Revolt of the Kulaks Has Begun

Do you know something we don't as yet? Or is this your wish list?

Yes, he needs to be made to understand. I bet he retires.

I do get a kick out of his whine that Republicans ran campaigns unfit for a democracy. Because, you see, with the internet I can sit here in Florida and see what kind of campaign Harry Reid ran in Nevada (among others).

A common meme among the dems is that conservatives are insular, xenophobic, and 'don't get out much'. Yet often, as with Frank's comments, dems amply prove themselves to have a very narrow focus and a spectacular lack of perspective.

Remember this is Massachusetts that kept sending that murderer Ted Kennedy back to the Senate, so a nasty-loudmouth-classless-moronic-creep like Frank is not really a big deal as far as Mass voters are concerned, in fact it is still a step up.

As to why noone calls Frank out for his behavior? The better question overall is why do Dems get a constant pass for their viciousness, hateful hubris, misogyny, womanizing, and two-faced attitude towards social issues anyway? The truth is that WE are to blame, for all we do is whine about the double standard without doing anything about it.

I do hope that subpoenas are now being prepared and will be served on George Soros.

"Repeat after me: Congressional Subpoena"

Oh, yeah. Never a "man" who deserved it more. Keep us posted if/when you hear more on this man's long-overdue investigation.

Margery Egan is right on except as to Frank not being smart enough to see the Fannie and Freddie disaster coming. When one is the cause of something and when one is in fact pretty smart it is not tenable to believe one didn’t see it coming. He saw it, but he didn’t care. His agenda is what he cared about, to the exclusion of all else.

Independent Patriot: WE are to blame? Just what are WE supposed to do? WE only control ourselves. WE do not control those who grant license to Democrats to act like jerks. Besides, by pointing out and declaring it when we see it, WE are doing something about it. But when WE do what WE can do, you will say WE are whining.

If I were the chief editor at the Boston Herald I would spend the next two years doing my damndest to make Bawney Fwank's life a living hell, all while showing just how relevant my paper was.

OT, tho' it does have to do with congresss. I just had to tell somebody. Listen to this:

My husband, a special ed teacher also certified in comprehensive social studies and an informed political junkie, just stoppped home at lunch. He told me he's working with a sub today.

She was watching him drill the class on the government. It went like this:

Parts of congress: (kids) TWO!
Called: HOUSE AND SENATE
What do they do: WRITE THE LAWS

The sub said,"That's not really true." My husband said, "Well, yeah, It is." She said, "Congress doesn't make law. You know in the constitution, it says, "Congress shall make NO law…um…abridging…you know, that part?"

Later she apologized, saying, "I'm sorry for butting in. But I'm a history major."

The retirements are coming….. After the 1994 landslide a lot of Dems realized being in the minority just isn't as much fun and retired. It will happen again and there are a bunch of older +70 Dems that didn't run this cycle. They will retire and try for the lobbyist lottery payoff.

Barney the Purple Dinosaur lost my vote, and whatever default respect I might have had for him, just over two years ago. He was as responsible as any, and more than most, for the collapse of the sub-prime housing bubble in 2008, just months before the election… and what did his campaign ads say?

THEY SAID TO ELECT BARNEY BECAUSE OF HIS FISCAL RESPONSIBILITY.

It turned my stomach every time I heard it.

I had great hopes for Sean Bielat. But frankly, I wouldn't vote for Barney no matter who was on the ballot. (In 2008, if I recall correctly, he ran unopposed… so I wrote in my wife's name. She later admitted that she'd written in my name.)

Really, he's just now lost your vote? It was your opinion that this laughable sodomite was fit for office until his aceptance speach? Get yourself a mirror – you need one too.

The electorate deserve to know what Frank was up to, including those who supported him all the way.

Thanks, Barney, you've substantiated every rotten thing I ever thought about you.

Frank is a wanker. No news there.

I immediately lose respect for any would-be pundit who insists that the mortgage bubble was solely fueled by Fannie and Freddie. They nhad their problems, that's undeniable. They were part of the story.

But Fannie and Freddie didn't promote lax lending standards. Fly-by-night mortgage companies looking for a quick buck did. F and F didn't tell those companies to encourage borrowers to lie. Nor did they tell them not to check. They didn't tell loan originators to promise borrowers that their lack of income was no worry because they'd build equity before the adjustable hammer fell.

Fannie and Freddie didn't tell investment ratings firms to rate CBOs and other derivatives of bad loans AAA safe. That was purely a matter of private financial opportunism.

Both parties were asleep at the switch when it was time to make sure clever math geniuses weren't packaging extremely complex and potentially very high risk investments as appropriate for widows, orphans, and pension funds.

It always feels good to blame "the other side." But I have seen the enemy, and he is us. We're the ones who keep electing partisan clowns from both parties. Sean Bielat wants us to think we can repair the fix we're in now with lower taxes and smaller government, but that's not what caused the collapse. It was our addiction to debt, our laziness in choosing our leaders, and the greedy opportunism that followed from our laxness.

Fannie and Freddie promoted lax standards by knowingly buying crap loans. The CRA and its defenders also get a lot of blame.

Note that Fannie and Freddie did lie about the loans in their packages, which screwed up everyone's risk assessment.

That was left to the folks who wanted Fannie and Freddie to be able to sell those things so F&F; could continue making buying packages of bad loans. They gave the big three ratings companies a monopoly on ratings and punished banks that didn't "invest" accordingly.

Note that the bank regulators also hosed banks by giving Fannie and Freddie stock an accounting preference, so banks overloaded on F&F; stock, which put them all at risk.

vladdy1 –
Dear God.
No, really, Dear God, help save us.
Please.
Many are doing what they can to turn this around in the face of those who've been deliberately blinded.

Can we call Barney a "Drama Queen" yet?

Nothing worse than a sore winner.

Is he married to that heckler? Gay marriage is legal in MA. He speaks of himself and Jim Ready as if they were married. I'm just wondering.

I also lose respect for any critic who can only point ever point the blame finger at government entities.

The bond ratings agencies and the creators of bad loan packages, not worth mentioning them, right? It's all the government's fault. Got it.

Have you gotten that transmitter out of your head yet?

Any Mass resident with the slightest bit of honestly deserved self-esteem is today already deeply involved in their preparations for moving from the state. Remaining there any longer is simply being complicit in forcible abuse.

Sam Adams and John Hancock would fight over who first got to put a bullet in Barney Frank.