“You Are A Disgrace To My Alma Mater”

“You Are A Disgrace To My Alma Mater”

So says Nevada reporter and political guru Jon Ralston about me.

I have been critical of Ralston for months over the way he has covered the Harry Reid – Sharron Angle Senate race.  While Ralston presents himself as a muckraking but neutral investigative journalist and talk show host, there has been — in my view — a decidedly pro-Harry Reid tilt to his muckraking, as I have pointed out time and again and again.

Ralston has jumped on every central meme pushed by the Reid campaign about Sharron Angle being crazy and dangerous and extremist.  Ralston was on Chris Matthews’ Hardball earlier this week yucking it up with Matthews about Angle’s supposed call for armed insurrection.

Yesterday, Ralston jumped on the evolving meme that Angle was race-baiting voters in Nevada based on an advertisement about illegal aliens.  Here was Ralston’s tweet, linking to an article in Slate magazine comparing the Angle ad to an ad run by Jesse Helms:

The words “Might be good for her base!  Race-baiting works?” were Ralston’s words.

Ralston is entitled to express his opinions on race-baiting, armed insurrection, and all the other Reid attack points.  But if he is going to do so, he needs to be prepared to defend his positions, not hide behind his supposed journalistic neutrality, or act as if he merely is reflecting what others are saying.

So I called Ralston out on the “race-baiting” language:

Ralston’s response was to send me a “direct message” denying that he accused Angle of race-baiting (erroneously claiming he merely was reflecting what the Slate article said) and calling me names: 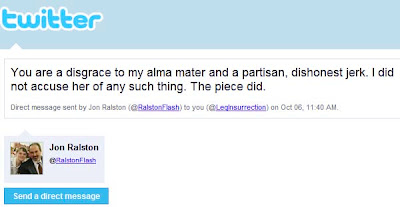 Ralston also sent out a public tweet calling me a “shill.”

I wear my political opinions on my sleeve, and anyone who reads my posts can evaluate my arguments — and the links backing up my arguments — with that in mind.  Ralston should do the same.  Don’t pretend to be something you are not, and then resort to name-calling when someone calls you out on it.

As to who is a disgrace to Ralston’s alma mater, I’ll let the facts speak for themselves.

I love that: "I did not accuse her of any such thing. The piece did."

No Mr. Ralston, you are the disgrace to MY alma matter. Just another ignorant person from Cornell that totes the status quo instead of thinking independantly. Were you one of the ones that spit at me when I wore my uniform on campus?

Reporters have such thin skins when it comes to pointing out their malpractice. I've had similar experiences myself!

You've got this guy nailed. He wants to make a name for himself and favoring Reid in his coverage certainly wouldn't hurt his career would it? While at the same time looking like hero to the other liberal media members.

Reid needs to get with the zeitgeist.

The only thing government does well. If it can do it at all.

Let's be accurate, Jon. Your alma mater is not Cornell Law School. To imply otherwise is, well…

The debate next week will be Angle's opportunity to effectively win the election.

The debate will be moderated by PBS' Mitch Fox, host of Nevada Week in Review. I have no clue who he is, but I assume that both sides agreed to him as the moderator so he must be perceived as fair by both sides. If he keeps the candidates focused on the issues, then I'm fairly confident not only will Angle crush Reid on the issues, but Reid will almost certainly shoot himself in the foot at least once. If that happens, Angle's lead will widen and there will be little hope for Reid to recover before the election on Nov. 2.

However, if the moderator allows Reid to divert the debate away from the important issues facing Nevadans and the natiion, and focus instead on all the irrelevant slime Reid's campaign and Greg Sargent have tried to smear Angle with, she could suffer and give up some of these hard won gains.

This guy is a textbook example of most on the left, trying to attack with no intellectual ammunition. What a pathetic person.

Poor Ralston. Writing a neutral statement such as "Race-baiting accusation could hurt Angle" or "Slate compares Angle ad to race-baiter Jesse Helms" was beyond him.

well, here is a much clearer example of race baiting, but its by democrats.

gratuitously referring to a hispanic woman not just as a "texan" but a "tejana."

As is so often the case with Ralston's type, "they can dish it out…". Besides, what's the big deal? If Ralston has indeed been neutral and evenhanded with regard to the Angle vs. Reid race, it should be a simple matter for him to refute your claims.

All Ralston needs to do is refer to those columns in which his criticisms about Angle have had a factual basis; or in which he has made positive remarks about Angle; or has criticized Reid; or even examined Reid's record in an arguably non-partisan way….Oh, I see. Well, now I understand why Ralston immediately resorted to personal attack: he had no defense.

Your accusation should have been directed towards Steve Sebelius. You know, the guy who actually wrote the thing you're accusing Jon Ralston of writing.

Thought you might enjoy reading this rant, Professor. I had a brief 'twitter discussion' with Ralston yesterday concerning his temerity in engaging in a battle of facts with you.

It was in my email 'spam' folder this morning:

Won't respond to you any more on twitter so your minuscule number of followers will have to do without. You have no idea what you are talking about; you are a dishonest partisan, too. I did not equate Angle with helms; Slate did. I link to a lof[sic] of different pieces. By the way, though, tell you friend the dishonest law prof I have decided it is race-baiting. Offensive, disgusting and lowbrow. I'm sure you can relate. Oh, by the way, you had his Twitter handle wrong. I fixed it for you. Good catch on spelling error, though. Bye bye..

I almost never use Twitter, thus have no real visibility there, but apparently Ralston equates one's 'status' as the number of followers one has on Twitter. hahaha

His spelling problem I corrected him on? …his term 'polemcists' and in his phrase 'dishonest polemcists.'

The correct spelling is, of course: polemicists.

Ralston took co-ownership of the Angle-Helms juxtaposition by retweeting it to his 'thousands' of followers and by added his own personal race-card smearing comment as well. The tweeter records are there for anyone to see.

Daly and Ralston both have a problem with facts, Professor. Thank you for shining this light on Ralston. Daly, of course, shined that light upon himself in a self-inflicted wound.

No A.M. Daly, it's not a joke. An Undeserved Race-Card is NEVER EVER A JOKE, Sir.

And, if you think it a joke, then choke on that joke.

This country is being ripped apart by Obama & Co for a ends-justifies-the means Socialist agenda. It is no joking matter, SIR.