If The Federal Deficit Were A Bumper Sticker

If The Federal Deficit Were A Bumper Sticker

What timing.  Earlier today a reader sent me this photo, which she took in Athens, TN, for my bumper sticker collection: 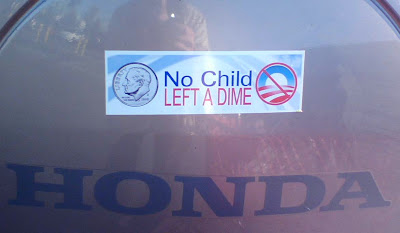 And moments ago, new deficit numbers were released by the federal government, showing that the annual deficit was $1.294 trillion, the second highest in history (i.e., since last year).  As reported by Bloomberg:

The shortfall totaled $1.294 trillion in the fiscal year ended Sept. 30, second only to the $1.416 trillion deficit in 2009, the Treasury Department said today in Washington.

No need to worry about running $1.3 trillion deficits. Social Security will be solvent for the next 35 years without making any changes. I know this because Harry Reid told me so in last night's debate.

Of course, Reid's delusional fantasy prompted the best line of the night from Sharron Angle:

"Man up, Harry Reid." I would have preferred she said, "get real you embecile", but that wouldn't look very senatorial.