Democrats across the country have been engaged in various deceptive actions to siphon votes from conservative Republican candidates.

In New Jersey, a Democratic candidate helped a phony Tea Party candidate get on the ballot, and the Democratic Party has a nationwide “divide and conquer” strategy of lending support to similar candidates.

Now comes news that the Democratic Party in Indiana is misleadingly supporting a Libertarian Party candidate in order to take votes away from conservative Republican Todd Young who is running even with or ahead of incumbent Baron Hill.

The Democrats have laid out $15,000 for a mass mailing urging voters to vote for “The Real Conservative”  who is identified in the mailer as the Libertarian candidate Greg Knott: 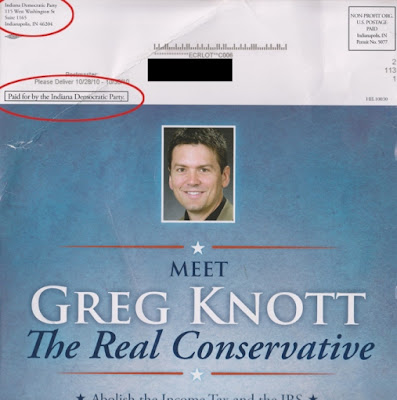 The Libertarian candidate recognized the misleading nature of the mailing, as reported by the Louisville Courier-Journal:

…Knott also said he knew that Democrats were simply using him to try to hurt Young and said his agenda is actually more progressive than it is conservative.

The Democrats cannot win on their own ideas so they have to try to trick voters.