Posted by William A. Jacobson Wednesday, October 27, 2010 at 07:00am 8 Comments
More Sharing Options

Vandalism of McCain signs, and houses/car bearing those signs, was widespread during the 2008 campaign.  I remember seeing a McCain lawn sign in Ithaca with a note attached to it asking people not to vandalize the sign.

A reader from California, who has figured out a solution, sent this photo of his car, with this note:

Here’s a picture of my car with my magnetic bumper stickers. I learned the hard way they have to be magnetic in the People’s Repub. of Santa Monica as, back when Dole was running against Clinton, against my wife’s wishes I put a Dole sticker on our car.  My wife had seen Dole yard signs spray painted with swastikas (savor the irony of swastikas for a man who almost lost his life fighting the Nazis) and warned me. She was right. The very next day our car’s windshield wipers were twisted into pretzels and the sticker mostly ripped off. Now I drive to a quiet side street where no one is around and apply them. Then, before I arrive at my destination, I again find a quiet street and remove them before parking. Tolerant lefties have given me the finger a few times and yelled unpleasant things, but I haven’t found one yet who can vandalize my car while I’m driving it !! 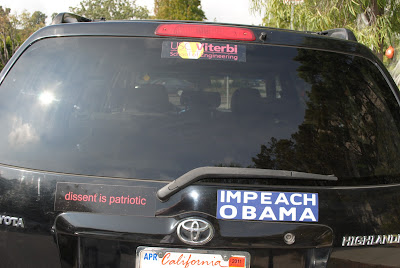 I’m not sure using magnetic bumper stickers is the ultimate answer, but it does seem to beat vandalism in the short run.

My hope is that our children and our children’s children some day we will live in a nation where the Right to Bear Bumper Stickers is respected, and where “parking while conservative” is just a distant memory from a less civil age.

Quite interesting how this man feels such "tolerance" and "love" from his leftist neighbors. Back in 2008 I had a "W" oval sticker on my car (from the 2004 election, of course) and, while my car was parked as my daughter was at ballet, it was ripped off. Funny though; even though a few weeks later an Obama '08 campaign center moved into the building where this incident happened, my McCain/Palin sticker was never torn off, nor was my car vandalized! I think the people who worked there enjoyed it…..gave them renewed meaning in their small, dingy, Obamabot lives (many of whom came from nearby MD to "vote early, vote often" I've no doubt). Almost no one has an Obama sticker on their cars here now…but I still see McCain/Palin stickers – and many with the "McCain" portion cut off and just "Palin" left. 😀

Out in Yerington Nevada they use more than the bumper of their car to get their political point across!

And yet, you never see any of the Liberal's bumper stickers or signs vandalized.

Although, I can't say the thought has never crossed my mind to do so, but I can proudly say I employed my self control and have never done such a thing. I respect everyone's right to freedom of speech. I don't have to like it though.

I do a lot of praying for changed hearts as well and to keep mine in check during these extremely trying times.

I have braved the lawn signs, but I have not braved the bumper stickers or magnets as of yet.

Irony is everywhere nowadays. My wife and I live in one of the few conservative sections of the Peoples Republic of CA, but refrain from putting bumper stickers on our cars. The reason? We have to drive into the bay area occasionally and don't want any liberals going "tolerant" all over our car.

I think Juan Williams summed it up when he said, "All this time I thought it was the liberals who were the tolerant ones."

I learned long ago (Goldwater bumper sticker in '64 — the year I was old enough to vote) not to put a bumper sticker on my car for any non-Left candidate. It's just too easy to have some jerk express his disapproval by scatching your car with his keys.

I've got a lawn sign up for Kevin O'Neill (Independent candidate for RI Senate District 37 against seven term incumbent Sue Sosnowski) but I sometimes drive to Providence and I would not care to park my car there with a non-Democrat bumper sticker.

My candidate (PA-7) had only magnetic bumper stickers. I've twice had it turned upside down while parked. Oh the horror.

I have had no problems with my bumper sticker…

Likely it's because most libs who are prone to vandalism don't understand it.