“What’s up w/obsession about O’Donnell’s opinions on sex?”

“What’s up w/obsession about O’Donnell’s opinions on sex?”

Kirsten Powers gets it.  Once again, the mainstream media and left-wing blogosphere — including liberal feminists — are sexualizing a conservative female candidate.  They obsessed over Sarah Palin’s breast size, and now they are obsessing over whether Christine O’Donnell masterbates and has had sex. 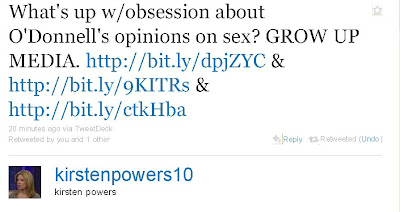 Here is a screenshot of the headline from ABC News blog linked in the tweet:

Here is the link in the tweet to Salon.com, the liberal home of Glenn Greenwald (I don’t blame him for this) and others:

Now the discussion about the candidate is all about her sex life and views of sex.  The economy? Tax policy? Terrorism?  Not relevant, they need to know if she touches herself.

You're not the first to notice that the Solitary Sin Club doesn't like her:

Why Rove and NRO joined that group is anybody's guess.

Alinsky-stank is all over this smear. O'Donnell needs to get on a quick path to refudiating these guys. They did this to Sarah Palin, with ridicule mixed in to create the "stupid slut" meme – which sticks in many people's minds still. Twitter is quick, hope she uses it!

She's had sex??? OH MY GOD, stop the presses! She's a regular female Casanova that one!

What's really grating is that these are the same people who lionized rapist/serial sexual harasser Bill Clinton and some even said they liked his affair with Monica. Screw 'em.

Salon.com, you're the embarrassment, not to Delaware but to the whole human race. She's already refuted the money 'issue', most people I know go through mental anguish when they get fired and nobody has yet proved that the lawsuit was not justified, and your obsession with her sexual views is puerile and childish.

She does use twitter, and she has been all aflutter on it since before her win. That said, she can only do so much. We have to help, as Jacobson has been doing. Push back. And change the subject.

Exactly. Personally I don't think O'Donnell or anyone else needs to refute every single stupid thing that is said about them.

The press didn't exactly stand on the table and shout at barack hussein obama's homosexuality with a number of young men, most noteworthy, Larry Sinclair.

Any conservative woman will be attacked by the mainstream media immediately and relentlessly.

I wonder if a lot of people react the same way as I do about the whole slut/prude/sex smear: yawn. The left spent the last few decades "sexually liberating" our culture, to the point where nothing is shocking or scandalous. Feh. Who cares.

This issue is a fine example of how the dinosaur media shows that it's extinction is inevitable, and they are aware of it. William Randolph Hearst discovered early on that sensationalism sells news. The dinosaur media cannot hope to sell news to the idiots that still buy newspapers, or read the headlines on the newsstand, or see the headlines on CNN while they are waiting for their free clinic healthcare or social services, or see the headlines on the growing number of televisions in fast food places, all of which are conveniently tuned into CNN. It is selling a product to the ADD consumer, the ones who hear the headline, eat the talking points and are subliminally controlled by their auditory/visual stimulus. In other words, Sheeple. You know them, the folks with an IQ of 75-85, the ones with a cellphone constantly stuck to their ear, an Escalade, Bling out the yinyang, several children that are constantly being told to "shut up, or I'll get the po-po to come get you" and a populist talking point axe to grind. Fortunately for this election cycle, they WILL NOT be voting. DO expect a huge victory this election cycle, not for Republicans, but for Conservatism, and American exceptionalism.

Apparently, Snoop Dogg is now the chief campaign strategist for the establishment elites of "both" parties. "We're gonna bitch-slap that ho!"

When are they coming out with X-rated the video?

Here is the left's reasoning: How can we trust a politician to screw the American people if she isn't willing to diddle herself?

I'd recommend they hold a sit-in on the issue… but I'm afraid about what they'd do while sitting.

What it all boils down to is Rachel Maddow and her unhealthy fixation on the female sex. She is an admitted and openly lesbian woman, she would appear in fact to be of the "bull dyke" variety. Lesbian sex is for all intents and purposes masturbation of one form or another, so she sees this disapproval of the act as a comment on her sexual practices (even if she refuses to admit it, even to herself) so she goes on the offensive and tries to make it into O'Donnell's problem, not hers. And from that point on, the rest of the Dims just pile on.

In my church it is a sacrament.