Almost everyone is jumping all over the Coffee Party for the pathetic turnout at its national convention last weekend.  Go ahead, kick the dead horse if you will.

But they all have missed one irrefutable measure of just how far the Coffee Party has fallen since it was launched to great media fanfare and glory.

This blog now gets more traffic than http://www.coffeepartyusa.com/, as demonstrated by Alexa‘s measurement of “reach.” 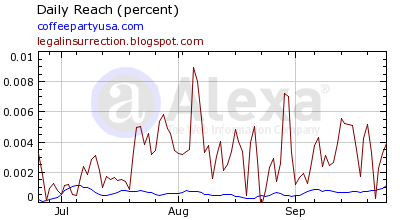 What a bunch of losers, if they can’t beat a do-it-yourself Blogspot.com blog, run part time by someone whose idea of graphic design is to separate words into syllables separated by dots, who picked the colors for his blog in poor lighting, who can’t even figure out how to put Blogads graphics in the side bar, who can’t manage to load cool looking YouTube and Twitter buttons like the rest of the world, and whose idea of wit is to publish photos of bumper stickers.

And you call yourself a national movement?  Then so am I.

…can't even figure out how to put Blogads graphics in the side bar, who can't manage to load cool looking YouTube and Twitter buttons like the rest of the world, and whose idea of wit is to publish photos of bumper stickers.
.
Heck Professor, all along I thought the lack of all those 'things' was a 'feature' and not a 'bug'?   Well whatever.   I hate Paypal but I'm going to use it anyway to send you a few bucks.   Use it to buy yourself a howtos book or something?   😉
.

i have to dispute that. you cannot fall without first having risen. and they don't seem to have done that, either.

If the Coffee Party blog was a radio show, the pink noise* between stations would be getting a higher audience.

*In the interest of clarity, pink noise is a signal or process with a frequency spectrum such that the power spectral density is inversely proportional to the frequency. People often confuse it with white or brown noise. I hope to God I didn't.

Yeah, but what about the web traffic for the F*CK TEA? Too afraid to show that chart, huh? I thought so.

a do-it-yourself Blogspot.com blog, run part time by someone whose idea of graphic design is to separate words into syllables separated by dots, … and whose idea of wit is to publish photos of bumper stickers.

I think someone needs a hug…

Hey, Rush mentioned you the other day – what else could you want???!!

"Yeah, but what about the web traffic for the F*CK TEA? Too afraid to show that chart, huh? I thought so."

How nice of you to drop by and leave droppings.

As long as you're both dressed. That's all I ask.

A little note to "jeannebodine" I checked my traffic rank against coffeepartyusa.com and i killed them. Legal Insurection is ranked considerably higher than my site. Sooooo, it stands to reason that they doubly kill them in traffic. If I could add photos to the comments I would be happy to prove it.

I can help you update your blog if you would like. I have been working on mine, too. The first step was to switch over to the new blogger templates – lots of new features.

I just checked out your side bar and you have lots of features in there. I think you're pulling our leg. ;O)

I bet the f— tea site did get alot of hits… from conservatives pointing and laughing at them.

Professor……leave "legal insurrection" as it is. We don't have to prove that we are web savvy to get our point across. Besides, it drives the latte sipping liberal web geniuses crazy!

@jeannebodine: since you can't seem to type in url's or follow links for yourself:

I suspect the majority of what little traffic the Coffee Party website garnered was due to conservative curiosity stimulated by conservative bloggers and pundits rather than the lamestream media's attempts to promote it.

The coffee party's failure to launch bespeaks the lameness of socialist special interests' ability to create an illusion whilst the Tea Party bespeaks the power of a true middle class grassroots coalition in action.

Heck, I had 4 cups of coffee about 2 hours ago, I think I'm about to have a bigger 'national movement' than their entire party..

I got a hoot out of your use of self-deprecation to body slam the coffee party. 😀

A.W. (above) said it: you cannot fall off the floor

@otiswild,
That comment alone is worth the price of admission!

This might have worked. They could have called it the "Venti, Triple Shot, Half Foam, Double Whip, Cappuccino, 1/2 Shot Hazelnut, Non-fat Soy In a Tall Cup Please!" Party. I think a lot more of them would have related to something less mundane than an ordinary old cup of joe… Then again, even that fancy schmancy label's already been used… http://www.yelp.com/topic/oakland-post-your-annoying-starbucks-drink-order-here

Well said sir. Your words pretty much spell out my blogging sophistication as well. But I do try.

The Coffee Party is a fantasy heartbreaker, and that is its big problem.

People get off on that? How strange.

The Coffee Party was a grassroots movement to preserve the establishment.

How that was ever supposed to work is beyond me. Why they thought it would work is simply due to the left's utter incapacity for introspection. They can't even realize when they're part of the establishment.