As detailed here before, the NAACP has launched a campaign to smear the Tea Party movement as racist.  Now the NAACP is doubling down.

In order to prove that it is all-in with left wing causes, and does not even pretend otherwise, the NAACP has teamed with Media Matters, Think Progress, and a new group called New Left Media to create Teapartytracker.org.

First reported on at The Daily Caller, the website is devoted, in the words of the NAACP, to monitoring “racism and other forms of extremism within the Tea Party movement.”

Yes, we know the model.  It is the Southern Poverty Law Center’s HateWatch blog.

SPLC’s HateWatch blog serves as a vehicle by which to falsely label legitimate political opposition to the Democratic Party as racist and extremist. I have documented how SPLC has exaggerated claims as to the existence of some Klan groups and the supposed increase in hate groups, and falsely smeared a black female law professor as being an “apologist for white supremacists.”  Now NAACP is getting in on the act.

Whether one thinks MSNBC or FoxNews are biased to the left or right, respectively, Media Matters and Think Progress are in a different league.  The misleading anti-Tea Party video created by Think Progress now is legendary.

Andrew Breitbart was right on point on this one, as quoted in The Daily Caller:

“It’s called projection,” Breitbart said. “The alliance of the left, the Think Progress, the Media Matters and the NAACP are projecting onto the Tea Party. The accusations are a projection of who the coordinated, well-funded left is. They are manufacturing the racism. They are the ones who are fomenting the violence, the ones who are the only perpetrators of violence over the last year.”

The roll out of the website demonstrates that NAACP mostly just regurgitates Media Matters and Think Progress stories.  Here are the most recent blog entries at the website: 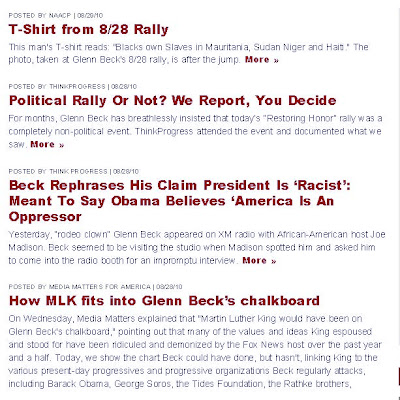 What is the NAACP’s big news?  A photo at the Restoring Honor Rally of a guy wearing a tee shirt that said “”Blacks own Slaves in Mauritania, Sudan Niger and Haiti.”  Wow, that’s a danger to the nation.

Perhaps the NAACP should run the video of Floyd Mayweather, Jr.’s anti-Asian rant, instead.  How about we now establish “BoxerWatch.org.”

The NAACP knows exactly what it is doing.  By creating a website devoted exclusively to watching the Tea Party movement, NAACP is attempting to create the impression that the Tea Party is dangerous.  Even if there is no real news to back it up, the public relations damage is done.

The NAACP has doubled down in its smear campaign.  Ultimately, the NAACP will be the biggest loser because it it marginalizing itself even more than it already is.

I went and looked. Now I have to burn my computer. thanks a lot.

We have video of Black Tea Party attendees at the 8-28 Restoring Honor Rally.

I'm glad to see this group is forced to spend a tremendous amount of time and resources chasing Beck around. It means Beck is hitting the bullseyes of the Left.

… blacks DO own slaves in Niger and the Sudan, not sure about Haiti, but no horror is too great for me to doubt about that place.

The photostream in particular is ridiculous. I'm probably to the left of a lot of this blog's readers, but there were very, very few photos there for which even the flimsiest case could be made that they were evidence of extremism or racism.

What I find so amazing is that when I talk to blacks about the "state of affairs" they all agree that the Federal Government should not be in their lives, telling them what to do and how to do it. Yet, 98% of them support Obama and the Democrats. If you challenge them, they get all mad and call you "racist". They cannot see how they are played by a system that includes the usual race hustlers, race baiters, etc.
Somewhere, somehow one of their own is going to rise above and tell them the truth.

I was there. To try and label this event or the people there as "racist", or "extreme", is ridiculous to the extreme. Although I think we all know they know that, which makes them doubly disgusting.

There was a black guy behind us who took the initiative in helping a disabled lady in a wheelchair secure a spot up front next to the fence so she could see. How did all those racist white folks react to him asking if she could squeeze in next to them at the fence? Oh it was horrible …. they cheerfully agreed and welcomed her to their area and thanked the black guy for helping her out. They were even smiling and shaking hands and stuff.

Whenever someone tries to play the extreme card with respect to conservative groups or rallies, I direct them here: