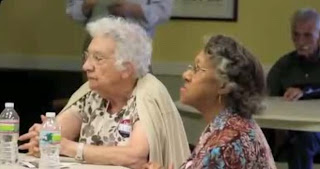 That’s not the literal name of the tour, but it is a fair characterization of the “Fighting for Social Security” tour of senior citizen centers launched last week by Democratic congressional candidate David Cicilline.

Cicilline, the current Mayor of Providence, is running in the 1st District of Rhode Island, for the open seat currently held by Patrick Kennedy, who is not running again.  The Republican candidate is John Loughlin.  The Cook Report recently moved the race from Likely-D to Lean-D.

As part of the Tour, Cicilline will visit senior citizen centers around the state to warn the elderly that Republicans are a threat to their checks.

Ciciilline kicked off at a senior center in Pawtucket, RI, where Cicilline and two state Democratic candidates offered free pizza to lure seniors to attend.  As reported by a local Rhode Island political website (see also video below and image above):

Democratic Congressional candidate David Cicilline yesterday vowed to fight with “every fiber of his body” any efforts to privatize Social Security, which he warned his Republican opponent, John Loughlin, would do if elected to Congress.

Cicilline also said he would help seniors get transportation to everything from doctor visits to senior centers. He also said he would get more federal funding for prescription drugs, saying seniors shouldn’t have to choose between their medicine and buying groceries. “In the richest, most powerful nation in the world, no senior … should face that choice,” Cicilline said. He spoke at the St. Germain Manor Senior Center in Pawtucket, kicking off what his campaign called the “Fighting for Social Security” tour.

The Providence Journal quoted part of Cicilline’s speech in which Cicilline falsely told seniors their checks would be at risk if Republicans were elected (emphasis mine):

Cicilline’s presentation to seniors was false in numerous respects. There is no threat to the checks to be received by seniors now in the system either under the present system or with any reforms now in the early stages of discussion. None, yet Cicilline cynically suggests to the elderly that their checks are in jeopardy.

Cicilline’s fear mongering about “privatization” also was misleading because the types of changes proposed by people like Paul Ryan would not affect anyone currently receiving social security, or even people a decade or more away, and would not require people to invest in the stock market.

Yet Cicilline raises the bogeyman of privatization to scare the elderly at senior centers.

There is a method to Cicilline’s political madness.  Rhode Island has one of the highest percentages of seniors in the nation, so scaring the elderly makes good politics.

What type of politician lures the elderly to meetings with offers of free pizza only to scare them half to death with false claims that their social security checks are in danger?

Well, let’s just say Cicilline is not one of those Democrats running away from Obama.

Update:  Thanks to a reader for alerting me that similar talking points about privatizing social security were deemed an outright falsehood by PolitiFact.  It appears that Cicilline is using DCCC campaign strategy. The Providence Journal uses PolitiFact, will it run a Pants on Fire evaluation for Cicilline?

Loughlin should hit back accusing this guy of supporting Obamacare, which denies drugs and medical care to the elderly.

Pity that they did not throw the pizza at this putz.

Here where I live, our metro newspaper (Milwaukee Journal Sentinel) links to PolitFact Wisconsin (which is part of PolitiFact National).

Here was an earlier one that also got a "Pants on Fire" rating:
Democratic Congressional Campaign Committee says Sean Duffy (running as Republican to replace David Obey – WI)wants to privatize Social Security

What's interesting is so far PoliticFact Wisconsin has ranked 4 statements as "Pants On Fire", besides these two cited above, the other was Senator Feingold (D) & Milwaukee Mayor Barrett, Democratic candidate for governor. So, right now, the Democrats are 4 of 4 for blatant lying.

I wish the Republican party would "grow a set" and start hammering at this – possible themes could be, "Attention Democrats, why is your party lying to you? Why are they underestimating your intelligence to tell fact from fiction? What other misinformation are they conveying to you, just to get your vote? Why are you being taken advantage of?"

Hey, what is a Democrat campaign without scaring Grandma.

I don't know the "lay of the land" of Rhode Island, but if I'm reading this right, was this taped at a "senior center" at St. Germain Manor?

Furthermore, if I am reading this right, St. Germain Manor is a HUD rent-assisted low-income project for the elderly & disabled:
St. Germain Manor – The Housing Authority of the City of Pawtucket

So, this turd blossom is trolling for votes at tax payer subsidized housing? These people are paying rents based on 30% of adjusted income (+income-medical expenses). They are the last people that have to worry about Social Security cuts – they are pretty much held harmless from increased housing costs, and any cuts in income correlate to a lower rent amount.

Please check this out – if this is going on, citizens with relatives that live in HUD rent assisted housing projects need a forum to report if this is happneing in their community too.

@alan markus – yup, it was at St. Germaine senior center, which I assume is part of the housing complex. Nice work.

Don't want to bog you down (but I do think this is something "big"), but someone could wonder if that senior citizen center was constructed with Community Developement Block Grants (CDBG) and if this policy was complied with:

"3) Political activities. CDBG funds shall not be used to finance the use of facilities or equipment for political purposes or to engage in other partisan political activities, such as candidate forums, voter transportation, or voter registration. However, a facility originally assisted with CDBG funds may be used on an incidental basis to hold political meetings, candidate forums, or voter registration campaigns, provided that all parties and organizations have access to the facility on an equal basis, and are assessed equal rent or use charges, if any."

Sometimes HUD regulations cross-cut other programs – i.e Public Housing. Don't have the time to figure that out right now. Just wondering how compliant the Housing Authority was in regards to Code of Federal Regulations.

Why don't Grandma & Grandpa hit back & scare the Dems? It wouldn't be hard. They could dress like Republicans, Christians & Jews and yell "Boo!" The Dems would be hightailin' out of those senior centers with their tails between their legs in no time flat.