September 1972.  Worth remembering.  I’ll bet most of our children never heard of it, because we don’t teach such things anymore.

History and terrorism started with the election of George W. Bush and Dick Cheney. 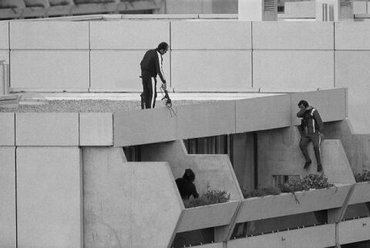 ——————————————–
Related Posts:
It’s al-Quds Day at WaPo (feat. George Bisharat)
What Does The “Israel Lobby” Have To Do With The Discovery Channel Hostage Taking?
The “Israel-Firsters” Slur Rears Its Ugly Head

don't forget that in schools today there are no "innocent" jews … they are all considered combatants according to Hezzbo, Hamas and the PLO … so no terrorists, just "freedom" fighters …

Interesting coincidence that the Mideast peace talks are going on at the same time.

Thirty years after he helped plan the terror strike, Abu Daoud remains in hiding — and unrepentant

…Among his [Abu Daoud's] claims, in his memoir and to SI, are these:

Though he didn't know what the money was being spent for, longtime Fatah official Mahmoud Abbas, a.k.a. Abu Mazen, was responsible for the financing of the Munich attack. Abu Mazen could not be reached for comment regarding Abu Daoud's allegation. After Oslo in 1993, Abu Mazen went to the White House Rose Garden for a photo op with Arafat, President Bill Clinton and Israel's Yitzhak Rabin and Shimon Peres. "Do you think that … would have been possible if the Israelis had known that Abu Mazen was the financier of our operation?" Abu Daoud writes. "I doubt it." Today the Bush Administration seeks a Palestinian negotiating partner "uncompromised by terror," yet last year Abu Mazen met in Washington with Secretary of State Colin Powell.

I have always took pleasure in knowing that every single one of the hostage-taking terrorists were eventually hunted down and killed.

Religion of Peace…thou shalt not suffer an infidel to live.

This has been swallowed up, and it is not taught. However, most homeschooling families that I know do talk about Israel, it's deep history, it's miraculous 7-days war and the tragedies like the Munich Olympics massacre. It has not been forgotten by all….

I am struck by the Howard K. Smith news broadcast. How much has changed in these 38 years in news broadcasting! They followed a NEWS OUTLINE; they had NEWS REPORTING; they did not SHOW ALL THE NEWSCASTERS REPORTING. They focused on (mostly) the ISSUES AT HAND.

Even though, even then, there was a clear leftist/progressive media bias, it was so much better! *sigh*

What a difference decades make. When Jim McKay spoke he spoke of Israelis as human beings…last week 4 Israelis, a 9 month pregnant women included were murdered by Terrorists and the only thing that Obama could muster was that it would cause problems with his peace process. Once again Jewish lives mean nothing. Today news companies and the left give honor to terrorists as if they are the righteous among us. They celebrate leftist dictators and murderers like Castro, and Chavez.How did the world get so mentality ill? But the better question is why do so many Jews go along? I hope those Jews in these Days of Awe truly ask for God's fogiveness for they will be responsible for the evils that befall their people in the years to come.

I was a young lad living in Germany then, how many remember, Fatah, Baader-Meinhof Gang, the Red Brigades? Murders all!

I "teach such things," William. Although no doubt many teachers/professor don't. And even if they do, lots of young people today can't be bothered, and that bothers me.

Thanks to Liberals, this event is forgotten and many in this country think the Jews were in with Bush and Cheney on 9-11. That's how far we've fallen.

I was a Military Policeman stationed at the European Command Headquarters near Stuttgart during those years. As trmccann said above, murderers and terrorists were all about at the time. We were checking every nook and cranny of every car entering the post.

At about the same time the dollar was devalued cutting the dollar's value against the Deutche Mark by more than 1/3 and the Arabs embargoed oil.

I thought the U.S. was going down the toilet.

If Obama had been president back then we'd all be speaking Russian today.

I highly recommend the documentary "One Day in September" about the event.