I saw this coming.

A couple of weeks after her Nevada Senate primary victory, Sharron Angle appeared on journalist John Ralston’s television show.  Ralston apparently is one of the most prominent political reporters in Nevada.

At the time, this was my first introduction to Ralston.  Here was how I observed his style in the Angle interview:

Ralston was not “hostile” in the sense of having a clear bias against Angle, but he was very, very aggressive, often interrupting Angle’s answers to loaded questions.

In late July, after Ralston also interviewed Harry Reid on his show, Ralston wrote a column announcing the death of Sharron Angle’s campaign.  Here were my observations:

I don’t know Ralston, other than watching him interview Angle and Harry Reid. My impression is that he is very keyed into Nevada politics, but he also is enjoying his 15 minutes of fame way too much. His interviews asked good questions, but in a flamboyant and domineering way which called attention not so much to the answers, but to Ralston himself.

I’m not prepared to declare Ralston to be the Geraldo of Nevada yet, but his death announcement appears to be a dramatic call for people to pay attention to …. Ralston.

In late August, Ralston broke the story — based upon a tape provided to him by a Democratic operative — that Sharron Angle was against aid to Katrina victims.  As I explained in my post at the time, Ralston’s spin on the tape was not legitimate, and misconstrued what Angle actually had said.  But it generated headlines, and attention.

During his original interview with Angle in late June, Angle offered to debate Reid on Ralston’s show, but when Reid appeared on the show Reid refused to answer whether he would debate, consistent with Reid’s insistence that debates could not take place for several months.

And so it remained until recently, when Reid finally stopped his stalling and agreed to a debate on Ralston’s show, but not until after early voting had started.  As Ralston was aware, the Angle campaign had insisted that debates take place before voting started, and also had declined to participate in a debate sponsored by the newspaper for which Ralston writes, the pro-Harry Reid Las Vegas Sun, because Angle didn’t feel the debate would be fair (Ralston would have been one of the debate moderators).

Pay attention to the details of Ralston’s explanation of the sequence of events, because it is clear that Ralston has manufactured a controversy about the Angle campaign backing out of a debate on Ralston’s show.

Here is how Ralston lays out the timeline:  After Angle’s June agreement to debate on his show, Ralston confirmed such intention in late August with one of Angle’s senior campaign staffers, and apparently the date of October 21 was discussed as being available.  [My note:  If true, then the campaign staffer was saying something that Ralston knew was contrary to Angle’s official campaign position that debates take place before voting started.]

According to Ralston, this past Thursday afternoon, the Reid campaign agreed to debate on the show on October 21, and based on the prior communications with the Angle campaign staffer in late August, Ralston immediately announced the debate would take place on October 21 on his show.

Within a half hour of his announcement, according to Ralston, the Angle campaign contacted him to let him know that there must be a misunderstanding as to the October 21 date.  The Angle campaign reiterated its position that debates had to take place before voting started, and also noted that other events already were scheduled for October 21.

Ralston has declared that the Angle campaign “backed out” of its agreement, and has used the controversy to attack Angle and generate enormous publicity for Ralston:

But using Ralston’s own explanation, it is pretty clear that Ralston has manufactured a controversy out of nothing.

When Ralston had the conversation with the staffer in late August about an October 21 date, did Ralston not consider that there might be a miscommunication since that was contrary to the Angle campaign position?  Did Ralston consider that perhaps the staffer was at odds with others in the campaign?  Was Ralston born yesterday?

After the Angle campaign apologized for any misunderstanding (as reported by Ben Smith), Ralston tweeted that he didn’t want an apology, he wanted the debate on his show: 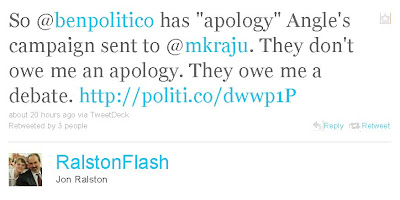 This is an entirely manufactured controversy, much like Ralston’s announcement of the death of Angle’s campaign and Angle’s supposed refusal to help Katrina victims.

I understand why the Angle campaign is treading lightly here.  You know, the thing about picking fights with people who buy ink by the barrel.  But the facts are the facts, and those facts show that Ralston took advantage of what he must have known to be a miscommunication.

Given Ralston’s performance in this, I’m not sure why the Angle campaign would now agree to debate with him as moderator, regardless of date.  (In an update to his column, Ralston conveys that its does not appear there will be any debate.)

Hopefully, the voters of Nevada will realize that the election is not about John Ralston, it is about the future of our country.

This has Alinsky all over it. Dirty guy JournOlist. I would hope the people of Nevada are smart enough to see through this.

The Sharron Angle campaign could put out another great commercial and let people see this guy's tactics…. Leave it to a lib journO to take the low road for Dirty Harry. Stinks like a sewer.

I know nothing about Ralston beyond what I've read here, and he may be eager to boost Reid, but guys like him are always prima donnas who see a high-profile campaign as an opportunity to boost themselves. After a while, they start to equate themselves and their own shows with the essence of democracy (people's right to know, etc.) and get downright surly if candidates don't see things their way.

For decades in NYC, NBC's Channel four had a leading on-air reporter who became the reigning political guru — Gabe Pressman. Late in every significant campaign — primaries and generals — Gabe would convene what became his personal "debate." A sitdown seesion with him grilling both (or all) candidates together. Trying to skip Gabe's debate — at Gabe's date and time of choosing — got to be a huge negative that only a candidate far ahead might consider. Even a shoo-in was well advised to show up anyway since Gabe and NBC might be pissed enough to cause them trouble for years into the future.

That's just life in politics. Whether or not someone in the campaign made a commitment they should not have made or thought it was tentative, it was not smart to take on Ralston by appearing to decline after all. In the end, I suspect, Angle will feel obliged to show up, but Ralston may be even more eager to submarine her.