John Kerry, spokesman for the new Democratic Party, and sometimes Senator from Ted Kennedy’s state, has a few choice words for you dummies, via The Boston Herald:

“We have an electorate that doesn’t always pay that much attention to what’s going on so people are influenced by a simple slogan rather than the facts or the truth or what’s happening,” Kerry told reporters after touring the Boston Medical Center yesterday.

Don’t worry, I reported for duty to prevent Kerry from swift boating the folks:

“It just continues the Democrats’ theme that the reason people are upset is because they don’t understand. They’re not smart enough. That sort of rhetoric just gets people even more upset,” said Jacobson

Do I get a medal for that?

Since many of the commenters feel I deserve a medal, do I also get to pretend to throw it over the fence at the White House?

And at the Herald link above they have an online poll.  These are the results as of 1 p.m.: 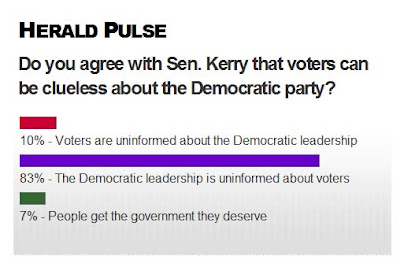 ——————————————–
Your Guide to John Kerry at Legal Insurrection:
Boston Herald: John Kerry A Bitter Clinger
John Kerry’s Persian Delusion
Kerry Against Afghan Surge But May Be For It
Pass John Kerry’s Cap-and-Tax Bill or Your Puppy Will Die
Pirates Were For Kerry, Before They Were Against Him

Can you say "Hope and Change," Senator Kerry?

actually Mr.Kerry, the exactly opposite is now true.

"reason people are upset is because they DO understand"

Thank God for the Internet, history and facts are no longer being fed and filtered by the propoganda-media.

I cannot believe I voted for this loser in 2004.

I am a former dem, I never remember being this pissed at Bush. Kerry doesn't get it, Clinton (who I voted for 2 times) doesnt seem to get it either.

This is why I reregistered as an Independent after spending a lifetime as a registered democrat. And I strongly support the Tea Party movemement.

Remember that dunce have every educational, social and cultural advantage and still remains a dunce. Were it not for his talent in bedding rich ditzy women, one wonders how he would support himself.

But he's right in a way. Democrats with the help of the MSM have been masterful at keeping their electorate in the dark and hooking them on a simple slogan (change you can believe in).
How else do you explain Charlie Rangel winning his primary this year?

Kerry's just upset that we're succeeding at waking the people up and getting them to pay attention.

Well, Tim, I thank you and welcome to the party.

Yes, you deserve a medal! Keep up the good work!

Yes, Professor…….you do get a medal!

Looking at your profile picture, wondering if you take off the Professor suit & tie and don some kind of SuperBlogger outfit before you rapidly "pounce"?

I second what Pat said – outstanding!

So now it's the voters who are clueless. It wasn't so long ago that L'Fraude maligned our brave troops in Iraq.

You have earned a metal, Professor.

This one is appropriately awarded for your Distinguished Service:

In my posts, I've mentioned more than once that the public has pretty much ignored the fact that they are the government. With their hands out or just not being bothered, we ended up with this hard left administration. But, something went amok. The people started to wake up and pay attention. In that vein, one can understand Kerry and his blubbering. They should be scared.

You are the caretakers of this government, not the morons in office. Educate yourselves on the issues and the folks running for and already in office. Don't act on their lies and promises. Make your decisions based on their words and actions. Ask the important questions! Love your country! Remember the ideals and principles this country was founded on. Remember those who have paid the ultimate to give this to us.

I've in the past mentioned the main thrust of our efforts have to be aimed at our elected officials, and I still believe that. However, it must be everyone's job to educate themselves as to not only what is going on as to this radical march to the hard left, but also we maybe have to reach back and re-educate ourselves on this country's basic ideals and principles! What is going on now is a complete betrayal of everything our founding fathers stood for. If we let it continue, shame on us all!

Of course a medal is due, If you want a purple heart, just put a band-aid on too.

insulting the voters is always a winning strategy. not! how stupid can he get? nevermind. his problem is infinite arrogance.

“It just continues the Democrats’ theme that the reason people are upset is because they don’t understand. They’re not smart enough. That sort of rhetoric just gets people even more upset,” said Jacobson

Right on the nose, Professor. Are they really so clueless as to think this is a winning strategy? — Well, we are talking John Kerry here, but the rest of the Dem leadership, too? My guess: they think it's Opposite Day and no one has the heart to correct them.

Talk to "The Curt Jester," he developed a John Kerry Medal Toss Game for his blog. Here's how to play: To play simply click on the Silver Star on John Kerry’s chest with your mouse and hold the button down. The Medal Throwing power bar will then start showing you the current medal toss power level. Release the mouse button when the power bar is at the desired level. The medals are then tossed onto the lawn. If they land within the water fountain area you get an extra 1000 points for empty symbolism. If you break a window you lose 500 points for vandalism. To throw again simply select Replay and try again. http://www.splendoroftruth.com/curtjester/2004/02/john-kerrys-medal-toss/

Those type of voters get stuk in Irak.

Well, there IS a medal that comes with the Nobel Prize but that's like winning a Grammy Award these days. Everybody has one.

I'd nominate you for the Nobel, but isn't there a carwash in Texas already giving them away with every Deluxe Wash?
Can anyone imagine a Republican getting away with a statement like this? Ironically, it is accurate ONLY insofar (as others in the string have pointed out) that many in the electorate have allowed themselves to be the proverbial Useful Idiots. The Internet: warts and all, has allowed for the instantaneous sharing of information like this. Who'd know 10 years ago how much a given candidate's fundraising total had reached? Who could check a politician's voting record, vote by vote? Who could follow analyses of their record and policies via ten different commentators (thanks, Redstate/Legal Insurr/Drudge/Hot Air)?
Sunlight truly is the best disinfectant.

In a sense, I think John Kerry is right.

But let me put that in perspective.

Fact is, last month I closed up the Queens, New York deli I'd been operating for fourteen years.

ObamaRules. ObamaRegulations. ObamaFees. They all cut into my profits to the point I was losing money. I started operating at a loss to the tune of nearly ten thousand dollars a month.

How do I feel?

I feel so poor I can't afford to pay attention.

Controlling scums.
Come to AZ, herpur72: warmer, less onerous, and we can use a good deli!
Good luck to you.

http://www.washingtonexaminer.com/opinion/blogs/Examiner-Opinion-Zone/Economics-for-progressives-The-Daniel-Klein-survey-explains-a-lot-95918739.html
This link outlines a survey that shows the inverse relationship between knowledge of economic issues and being a liberal. The point being that liberals are the ones that are the uneducated ones.

There in lies the problem; the Democrats think you are too stupid to understand that their undermining our Constitution is really good for you. You see, they are the elite, and they know so much better what is good for you than you do. Just look at how they spend your money. What would make you think that you should have any say in that process?

Kerry is pandering because he wants Hillary's job. And if Hillary leaves, and Kerry is appointed Secretary of State, you can then call us the U.S.S.A.