Posted by William A. Jacobson Thursday, September 2, 2010 at 10:22am 13 Comments
More Sharing Options

Sam Stein writes at HuffPo today that increasingly libertarian social attitudes in the Republican Party combined with the failure of Democrats to live up to campaign promises, has led Democratic Party insiders to worry that “the Obama administration risks losing the gay rights community (or at least depressing their votes) with its tepid embrace of their priorities.”

I thought about this point this past weekend, but in the context of the Democratic Party stranglehold on the black vote, and to a lesser extent, the Latino vote.

The ferocious reaction among Democratic Party elites and the left-wing blogosphere to the Restoring Honor rally was in part personal (they hate Glenn Beck and Sarah Palin), but also driven by fear that core constituencies may be drawn to a race-neutral movement.

Nothing worries Democrats more than a movement which actually practices the philosophy of judging people not by the color of their skin, but by the content of their character. 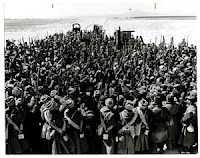 The Democratic Party thrives on group politics, in which trumped up claims of racism or homophobia are used to keep the electoral troops in line.  These group politics are all the Democrats have left, and if that political bubble bursts, the Democrats will need to go through a major reincarnation in personnel and spirit.

The current political atmosphere reminds me of the scene in Doctor Zhivago when the crusty old Czarist General leads his young soldiers through a crowd of army deserters near the war front during the First World War.

The deserters beseech the soldiers to come over to their side, which does happen, as the soldiers pull the General off his horse and beat him to death.

Yes, I see the irony of using a movie scene about the Russian Revolution in the current context, but I think we are witnessing something similar in the upcoming elections, at least if recent polling is accurate.

Core Democratic groups either are switching sides or staying out of the battle, as attempts to portray the Tea Party movement as racist fall flat.  The Democrats are at risk of being left with all Generals, and no troops.

Once the false charges of racism are cast aside, these core groups will realize that the modern Democratic Party has nothing to offer other than crushing deficits and national debt, high unemployment, and a ravenous desire to control individual lives.

We are not there yet, but I sense we are approaching that tipping point.

Update:  In this post at ChicagoBoyz (linked by Ben Smith as reflecting Glenn Beck’s view), the strategy is to undermine the Democratic Party’s use of race as a perpetual weapon:

and a ravenous desire to control individual lives.

That's right! Those Democrats, always trying to tell you that you shouldn't be allowed to marry the person you love! Wait, what?

UberMitch has a point. I just wish Democrats cared about rights other than the right to get gay married or be here illegally.

Most Democrats I speak with at work and home are very outspoken about opposing Gay Marriage. I find it very strongly opposed even by most of my minority friends whom are Democrats (I was somewhat surprised by this). I have grown to accept that Liberty is Liberty whether you agree or disagree with what is being done by another that does not harm you. Remember this though, You freedom to be you is the same as my right to be free FROM you.

Mitch, Mitch, Mitch. You know full well that there are many Democrats that oppose gay marriage and many Republicans who are not opposed to it. This is a minor matter compared to the extent of the control desired by the Democrats. Furthermore, that is the whole point of the first sentence of the article: "… increasingly libertarian social attitudes in the Republican Party …."

I believe the Libertarian point of view is that we don't care whom you marry. I believe that the issue is "why does the government care?" I am sure that any couple can find a church willing to "marry" them. I have heard many times the shrill cry "Get the government out of the bedroom!" This appears to be the opposite cry "Get the government into the bedroom!" Government actions, such as HIPPA have made it difficult, if not illegal for someone to share health information with you, even if they know it involves your partner. I favor re-writing the tax code to remove the "benefits" of being married. Would you agree, if those benefits have been something you have been denied?

Marriage seems to be the major issue with gays at this moment. I am as far right as any redneck, but find it a problem that the government dictates issues of marriage. When I used to go to church, I was under the impressionn that marriage was a sacriment of the religious institution. If a religion want to marry gays or anyone else, were does the government fit in? On the other hand, if the issue is a contract, then it would seem that the government should not demand that only a select group of people can form a contract. So I really don't feel that the issue is one for the government. Perhaps if the gays really wanted a union they would not use such an inflammatory expression as marriage but worked to have equal access to contractural unions. Then join a church that sanctioned the union.

But, most gays that I know happen to be small business owners. I wonder what will win out when they come to the realization that Obama is killing the economy and thus there business.

The question, as I see it, is when is identity politics OK and when is it not OK? Clearly, the Democrats have no problem appealing to the African race, the female gender or gays. Just as clearly, they see it as completely abhorant for Hitler to appeal to German nationalism or Aryan racism. The questions is – how does one decide what is good and what is bad in the realm of identity politics. (The answer of course is that there is no good in identity politics, but you can't expect the left to make that rational step in a single bound).

and a ravenous desire to control individual lives.

This may well be the most fundamental difference between the two parties.

While the Republicans may be cursed with a few of these types, the Democrats seem absolutely infested with them.
–

The black voting bloc is absolutely crucial for the Democratic coalation to win elections. As I've pointed out on other blogs, the math is pretty simple. 13% of the population is black, and 90% of blacks vote Democrat. Blacks so loyally vote Democrat that it's like the Democrats have a 12% headstart in every election. If the black vote was split evenly between Republicans and Democrats in the '08 elections, McCain would be president today. That's how important the black vote is to the Democratic coalition. So they perpetually play the race card to plant the seed in the mind of blacks that Republicans are racists and bigots who are unworthy of the black vote. It's been a strategy that has worked brilliantly for the past 40 years.

But it's a real tragedy that Republicans allowed it to happen. The very reason why the Republican Party was formed was because the Democratic Party refused to abolish slavery. In the 20th century, 97 Democrats publicly condemned Brown v. Education and pledged to continue segregation. It was the Democratic Party that formed the Ku Klux Klan to inhibit blacks from voting in elections. It was Democratic senator and Klansman Robert Byrd who filibustered the Civil Rights Act of '64. A year later, nearly every southern Democratic senator opposed the Voting Rights Act of '65, including Al Gore, Sr. It took the leadership provided by Republican Everett Dirkson to get 94% of Republicans to vote for it to get it passed. It was Republican federal judge Frank Johnson who authorized Martin Luther King’s historic protest march from Selma to Montgomery, overruling Democratic Governor George Wallace who had denied the activists permission to march.

And somehow, in spite of this long history of actual Democratic racism, the Democrats are able to paint Republicans as racists and garner nearly 90% of the black vote in elections.

Identity politics starts at the base level…..city council, county council, etc.
Here in SC (and I'm sure elsewhere) it isn't a secret that, in order to get elected, you have to have the great big D behind your name. why? as stated, the blacks vote D 90% of the time. I have good friends that are as conservative as they come, agree with the R side of life yet to get elected put the D behind their name. when will someone have the cojones to run…and win locally…as a republican, and show the black voters that you can be a good politician AND a republican?

as for gay marriage, Obambi himself says he opposes it…so there are both Democrats AND Republicans who oppose it. Why any sane male would want to be married is beyond me, but if some gays want a lifetime of nagging, that's their decision.

I thought this article was going to be about Guam.