One of the talking points for why Christine O’Donnell would lose to Chris Coons was Coons’ money advantage, something on the order of magnitude of $1 million to $20,000 cash on hand as of yesterday.

That is one talking point which is disappearing before our eyes, as money pours into the O’Donnell campaign and the Conservative Senate PAC (whose websites crashed earlier from overload). 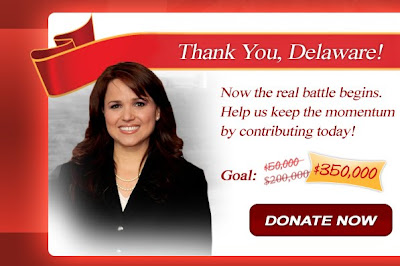 The NRSC is going to be bypassed. I don't think they figured on that possibility.

I was in the Castle group, but let the healing begin. If O'Donnell ends up within striking distance it would be truly epic. Hopefully the left will ignore her like Scott Brown. Coons is right around 50% against her, and since he's a strong favorite I believe we can assign him incumbent status, meaning he's precariously close to being vulnerable. The difficult part is keeping turnout low while getting a flood of Tea party/conservative republicans to vote. This won't happen if the left and moderates get too scared of her. It's all about heavy support while still staying under the radar. I would love to have to admit I was wrong.

I watched the site from earlier today (say, 8:30 – 9:00am ET). She started out looking for $50,000 and was three-fourths the way there. By the time Rush, the news, NRSC, etc. got on the ball, the campaign had had to change the graphics about once every hour to hour and a half.

Notice that the left in America is not partying on this news. For the observationally obtuse, I didn't say they weren't making fun of her.

But there's a chasm of a difference between celebrating your own impending political victory versus "nuts-n-sluts"-ing her (with apologies to the professor!).

In fact, this difference just played out on the GOP side of the ballot.

92% of 500K. Looks like the voters of this country are sending yet another message to the establishment republicans. At what point will they understand that business as usual isn't working for us?

And another "unelectable" candidate, Mark Rubio is surging ahead to a big lead in Florida too.

These is not such thing as "safe" districts and "unelectable" candidates. Let the voters decide. The elites have been wrong about everything else so why should we believe ANY of their opinions?

Nothing wrong with being pragmatic, Mike.

It's just less fun to vote/root for.

"These is not such thing as "safe" districts and "unelectable" candidates."

Well, she'll need every penny of that $750 grand and four or five times that much. I really do hope I'm wrong and that she finds a way to win. But enthusiasm from the troops has its limits, and these are some of the cold hard facts about little Delaware.

That electorate is overwhelmingly Democrat. That's why Joe Biden was the Senator for decades after all. Mike Castle was the exception, first as Governor and later as Representative(sort of like the tendency of Massachusetts or Rhode Island Democrats to go for the occasional moderate Republican as Governor). Delaware Democrats like Mike Castle.

In the last midterm election for a Senate seat, in 2006 (not so long ago), slightly more than 240,000 votes cast,of which Democrat Tom Carper got 171,000 and his Republican oponent 70,000. Carper won by over 100,000 votes or in round numbers 70% of the vote. Carper's margin of victory was close to three and a half times the number of Delawareans who voted for O'Donnell yesterday.

This is quite a hill to climb, so that even a more obviously qualified and attractive candidate than O'Donnell — one with no "flaws" in his or her past — would have a tough time climbing even in a boffo year for conservatives and Republicans. And there is no point in citing Rubio or Angle as models because they are running in swing states, not solidly Democratic states.

Purely from a cost-benefit point of view, the $3 million that O'Donnell needs to raise to put in a decent showing would be better spent putting the nails in the political coffins of Harry Reid or Russ Feingold.

2 more days to get to three?

Linked to at:
Bob’s Musings: The Morning [And Evening] After The 14 September Primaries
—–
It's Time To ROC 'N' ROLL:
Restore Our Constitution & Restore Our Lost Liberties