When a tape of Christine O’Donnell commenting in the 1990s that she had “dabbled into witchcraft” surfaced, the media and left-wing blogosphere (and unfortunately, a few on the right) went wild.  There was nothing of substance to the story, as it turns out O’Donnell was talking about events when she was in high school.  Yet the story consumed several news cycles.

But a much bigger story has surfaced, which has received no mainstream media coverage.  The blog Patterico’s Pontifications has broken a story about potential abuse of power by O’Donnell’s rival, Democrat Chris Coons:

Tonight I spoke with Alan Muller, who runs a site at Green Delaware — and thinks Chris Coons should be defeated. Mr. Muller wrote a blog post about how he had been harassed by Chris Coons for his local political efforts… So what did Chris Coons do to Alan Muller? Well, Muller says that he was an activist who often spoke out at city council meetings — until his ownership of a historic property gave local authorities the chance to use the power of the government to harass him. 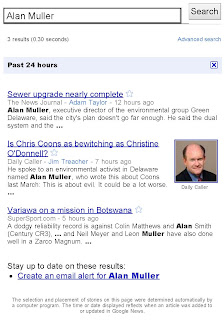 The details are in the post, but the mainstream media is silent.  A Google News search with Muller’s name turns up a whopping 3 news items in the past 24 hours, one of which was by The Daily Caller Blog.  The only “hard” news story was about a sewer upgrade dispute in which Muller is involved on behalf of an environmental group.

Only conservative blogs have linked to the Patterico post; there is no need for left-wing blogs to bother with it, so long as it doesn’t make its way into the mainstream media..

The mainstream media is right to understand and investigate such a story before running with it, something they did not do for O’Donnell.  The media did not wait to hear her explanation, instead treating the story as if she were a practicing Wiccan.  A story about someone “dabbling” in something in high school does not have much ring to it.

One small example of what we are up against.

Such liberal media hypocrisy! We must do our best to spotlight how much Coons is an extremist and reveal his abuse of power.

Eight posts below, you're accusing Coons of being a "bearded Marxist." Now you're accusing him of siding too much with Republicans and treating environmentalists unfairly? And the media of covering up the allegation that he's biased in favor of Republicans?