And Herein Lies The Dems Problem

And Herein Lies The Dems Problem

From the Obama rally at the University of Wisconsin-Madison, where hope is still alive, reality prevailed:

Emily Lawless, a UW-Madison junior from Lakeville, Minn., waited in line five and a half hours for the chance to see the president live.

“You’re not going to remember your accounting class when you’re 40, but you’ll definitely remember this,” she said.

Enthusiastic, but will they vote?

But the thrill of seeing the president doesn’t necessarily translate into supporting Democratic candidates during a midterm election. Even Lawless admitted she would likely not vote. “It’s too much work with the absentee ballot,” she said.

Which reminds me, I haven’t run this photo in a while: 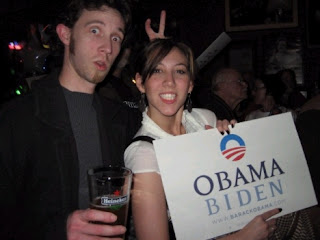 I know of at least ONE person at that rally who is a Real Conservative, but who went simply b/c a Presidential visit in your hometown IS a rare event.

And at UW-Madison, a Presidential appearance is also a helluva good excuse to hit the bars. Better than passing a mid-term in Accounting!

When young folks talk this way, I always wonder how they mustered the brainpower to make it into college in the first place. Don't they realize that there should not be anything special about "seeing" the POTUS? He's just another hired hand. It isn't supposed to be about "celebrity" status. That mindset is toxic to our nation.

off topic, but i have a post on alan grayson's medacious attacks on his opponent, Daniel Webster. I love the title and wish i was first to think of it: The Devil and Daniel Webster.

She's a third string letter turner on Wheel of Fortune. He's the new Economic Equality Czar (as yet to be announced).

"Won't remember" her accounting class? I'll keep track of that name so I don't ever hire her.

Where are they now? I'd bet the unemployment line…

Not to diminish the size of the crowds, but the weather was great in Wisconsin yesterday – beautiful Fall day. Perfect day to be outside, hanging with friends. It was noted somewhere else, that UW classes were cancelled during the event. Was this really a political event or more of a social/celebrity event?

I hadn't thought about how many "likely voters" were there and some being students from other areas, where do they vote? Does the young lady (Emily) vote in Madison or her hometown of Lakeville, MN? If she votes in MN, her attendance doesn't do much good for Governor candidate Tom Barrett and Senator Feingold.

They are both still at Applebee's. Only, he's washing dishes while she seats the new arrivals.

"You're not going to remember your accounting class when you're 40 …"

I'd have a good comeback for this if I could remember when I was forty.

It's interesting that people who think so little, think so much of themselves, and so little of the people who cut classes to attend their rallies.

Here we go again, photoshops and ridiculous quotes from the 'Obamagasms Tour 2010 Edition' with the hopey change clingers and clueless college kids.

They won't vote in the mid-terms. By using them to make us believe he still has it is pointless.

I was particularly more interested with his backyard town meeting yesterday. Spoken like a true Preacher, he explained his conversion as an adult to Christianity. He really went out on a limb. I hope and pray for him that he meant what he said. But if the idea was to create sense about his politics by his profession of faith, it fell really short and does he really want to go there? Yea, he does because it's that bad for them.

"It's too much work with the absentee ballot"

Envelopes and stamps are hard. Why can't we just text it in like American Idol?

When I was a freshman at the University of South Carolina I got to see Ronald Reagan on the Horseshoe, he gave a speech and was awarded a honorary law degree from the School of Law. There were about 6 protesters outside the event that were chanting "1 2 3 4 we don't want your dirty war" and they were surrounded by nearly 5000 students chanting "USA! USA! USA!". Hard to believe that there was a time that such a display would take place on a campus!