Wait for It: The Mongolian Neo-Nazis / Tea Party Connection

Wait for It: The Mongolian Neo-Nazis / Tea Party Connection 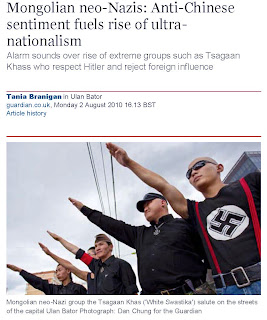 According to The Guardian, neo-Nazi groups are on the rise in Mongolia in reaction to increased domination by ethnic Chinese:

Dayar Mongol threatened to shave the heads of women who sleep with Chinese men. Three years ago, the leader of Blue Mongol was convicted of murdering his daughter’s boyfriend, reportedly because the young man had studied in China.

Though Tsagaan Khass leaders say they do not support violence, they are self-proclaimed Nazis. “Adolf Hitler was someone we respect. He taught us how to preserve national identity,” said the 41-year-old co-founder, who calls himself Big Brother.

Someone needs to tell these hoodlums that real neo-Nazi’s don’t like Mongolians, either.

How long will it take until Think Progress and the Southern Poverty Law Center try to make out a Tea Party connection?

After all, if false allegations of a Tea Party connection were good enough for Bill Sparkman, the IRS Plane Bomber, Amy Bishop and other cases, why not here?

I demand equal treatment for Mongolian Neo-Nazis. Why shouldn’t they also become pawns in the media war against the Tea Parties?

The reactionary attitude almost makes sense (see: History of Tibet 1949-present), and while their brutality is obviously disdainful, I wonder, why the Nazi imagery and connection? Won't people see through this as being not about Mongolian culture (which has nothing to do with Mein Kampf or German Lebensraum) but about violence?

that was funny! thanks!

um, if they really wanted to follow nazi ideology, wouldn't they all shoot themselves?

I mean they do know that hitler hated asians, too, right? His long term (and i mean long, long term) goals was to kill pretty much everyone who was not an able bodied straight german.

But they wouldn't be the first to take his ideas and apply them to people that hitler wanted to exterminate. I mean saddam wrote unser kampf ("our struggle") which basically was his attempt to adapt naziism to the arab cause, including the jew killing.

Btw, big brother/little brother has a certain currency in chinese culture. i have never gotten it, but it matters in some way i frankly don't get. for instance the taiping rebels followed a man who claimed that he was jesus' younger brother. He had come to this conclusion after he had a nervous breakdown, following his failing their mandarin exams (which anyone who has taken the bar can relate to).

Did i mention i am a wealth of largely useless info?

btw, i just read that they also listen avidly to Glenn Beck.

But more omninously, they also follow this blog. oh noes!

The Nazis were all over the map regarding race, although they were consistent in their Anti-Semitism and anti-Slavism (?). They sometimes regarded the Japanese as the "Aryans of Asia," sometimes not. Their relations with radical Islam are interesting. When Himmler was desperate toward the end of the war he allowed Balkan Muslims into the SS (the Germans also gave some sort of racial pass to the Cossacks). Baath Party doctrine was a lot like Mein Kampf, which is why the Sadaam/Adolf/Josef connection.
If I remember correctly about the Big Brother/Little Brother notion in China it is interesting. Little Brother has watched Big Brother while growing up and absorbed his learning and then taken it a step further. Something like that, at any rate.

There is something very attractive to certain people about Nazi imagery, uniforms, marching and God knows what else. I think people "get" the idea of destroying your enemies and a self-conscious mix of strength and brutality. It may have to do with the Nazs New Age aspirations (vegetarianism, animal rights, astrology, alternative medicine, distrust of technology, the list goes on and on) and their conscious use of world wide symbols (the swastika was the best known but they coopted runes and other "ancient knowledge" signs) which just might make them suprisingly attractive in odd corners of the world

Yep — you are blogrolled at http://whitehouse-org.blogspot.com/ ?

I look at that photo and I see the New Black Panther Party.

"There is something very attractive to certain people about Nazi imagery, uniforms, marching and God knows what else. I think people "get" the idea of destroying your enemies and a self-conscious mix of strength and brutality. It may have to do with the Nazs New Age aspirations (vegetarianism, animal rights, astrology, alternative medicine, distrust of technology, the list goes on and on)…"

I think the concept you're looking for is IRRATIONALISM. All political philosophies are on a continuum along two axes: how much government and how much rationalism.

The real Nazis were aligned with the Japanese. Indians served in the German armed forces during WWII. Nazi Germany gave military assistance to the Nationalist Chinese before WWII started.