The Ultimate Walking Around Money

The Ultimate Walking Around Money

Posted by William A. Jacobson Wednesday, August 4, 2010 at 07:00am 7 Comments
More Sharing Options 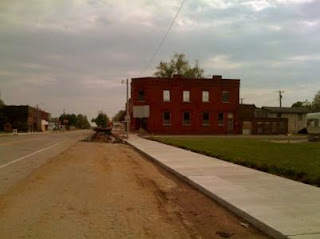 Being someone who has taken an unnatural interest in Stimulus-funded sidewalks, I searched the report, and sure enough found this:

“People around Boynton, Oklahoma were left scratching their heads after the town was awarded nearly $90,00096 to replace a quarter-mile stretch of sidewalk that was replaced only five years ago.

One longtime resident of Boynton, Ray Allen, said the project “had been the talk of the town recently, and none of it positive,” because it is “100 percent a waste of money.” Another resident, Mike Lance, noted that “the best indication of the absurdity of the project is what the contractor did with a section of sidewalk at the north end of town – one that fronts no homes or businesses, and leads directly into a ditch.” Officials with the Oklahoma Department of Transportation defended the project as necessary to bring the sidewalk into conformity with federal guidelines.”

The Boynton, OK sidewalks remind me of the miles of sidewalks to nowhere in Warren and Woonsocket, Rhode Island, about which I have posted previously.

Complaining about sidewalks may seem pedestrian, but there is a larger point.

The Stimulus Plan was — as many of us recognized at the time — just a way to buy votes by rewarding favored political groups. The reason infrastructure figured so large in the Stimulus Plan was that the work almost always is done by union labor. Whether a project really was needed, and whether it should and could have been paid for in the normal course by local government, was secondary.

Funding unnecessary sidewalks to help political allies is the ultimate walking around money.

Tom Coburn, MD of OK was the co-author of the report with McCain. And, you have to give him credit about noting a waste of money in his own state.

"Complaining about sidewalks may seem pedestrian, but…"

"Officials with the Oklahoma Department of Transportation defended the project as necessary to bring the sidewalk into conformity with federal guidelines."

Holy crap! Can't have that! We wouldn't want our vital quarter mile ditch access sidewalks to fail to conform to the wonderfully wise federal guidelines would we? By looking at that picture, its obvious that sidewalk was very, very unsafe!

Wait, there are federal guidelines for *sidewalks* ?!?

How do they justify that? Commerce clause?

There are sidewalks in my hometown, still in use, that were poured by the WPA. But those were done partly to teach the young men a marketable skill. And sidewalks at that time (and for 20 years after) were still used to get from one place to another.

Maybe one of the young White House aides read about them in a Wiki and thought it would be a cool and Unprecedented and Historic project?

Does anyone other than the Federal government spend money to build sidewalks any more?

"Complaining about sidewalks may seem pedestrian"

Fun note: The pinyin for the Chinese word "to walk" is spelled xing, and when my Chinese teacher first came to America, she was very excited because she thought we had pinyin on our crossing signs (X-ING or XING as they sometimes say).