Why do they feel the need to keep telling themselves such things? 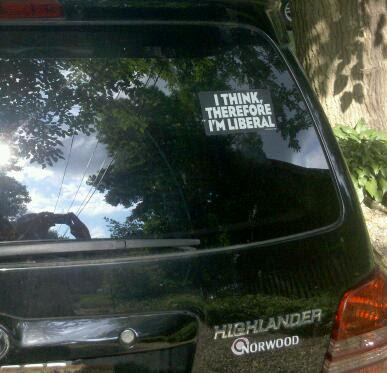 So this liberal who thinks, placed his bumper sticker on the back window of his SUV, thereby blocking views necessary for safe driving, which is why that kind of sticker placement is against the law. Maybe that liberal needs to go think somemore.

Liberals confuse "Thinking" with doing and producing real results. That is why, most academics are liberals, yourself being an exception of course.

I would guess in possession of a somewhat faulty thought process.

"I think of myself first, therefore I'm liberal" is more like it.

Just got through cruising JournoHole Eric Alterman's water-treading explanation of why he referred to McCain supporters as "F*cking Nascar retards" that you linked earlier. Professor Alterman — author of What Liberal Media? — wants us to believe that he wrote that out of frustration of being constantly told that "real Americans" prefer Budweiser to pinot noir, as if condescension was coming from the Middle American masses and not the coastal elites. The above photograph tells the real story.

In my hometown of San Francisco, not a day behind the wheel goes by when I'm not confronted with a crazy-quilt of bumper stickers questioning the humanity or sanity of anyone who opposes unilateral disarmament, green energy, same-sex marriage, or the issue du jour. A bumper sticker wasn't good enough for one woman's Prius: She used peel-off vinyl adhesive letters to put on her rear door "BIG CAR = SMALL BRAIN".

@William A. Jacobson: I haven't seen that one in a while. She might have moved from where I regularly saw it. I figured she might have been proud enough of it to put her own pic online, so I did a search.

I couldn't find "BIG CAR = SMALL BRAIN," but I did find this from an Italian blog.

I did notice liberals don't buy American. Isn't a Highlander a Toyota? Isn't the car a bigger statement than the sticker?

Liberals, post-moderns… they believe that if they say it, it makes it true. Thus, in the words of the ineffable Mitch Berg of shotinthedark.info, they generate a steady stream of 'chanting points' used to try to coerce reality into the form they would prefer. 'Reality-based community' is one of the first such of these that I recall noticing.

It really reminds me of when I was a kid, trying to argue with my three-year-old brother. It basically didn't matter what I said, he would just say, "No it's not!" Eloquence is of sadly little use in such situations.