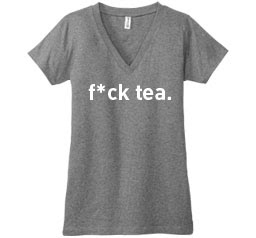 I guess the Coffee Party astroturf didn’t achieve its goal.

So one of the people who helped build the Center for American Progress, creator of Think Progress, has created a new movement, hitting upon a slogan which really expresses their profound stupidity and childishness, as reported by Ben Smith:

… the Agenda Project, a new, progressive group with roots in New York’s fundraising scene and a goal of strengthening the progressive movement, has launched the “F.*.c.k. Tea project,” which is aimed, the group’s founder Erica Payne wrote in an email this morning, “to dismiss the Tea Party and promote the progressive cause.” …

Payne, a veteran consultant to progressive groups, is a co-founder of the Democracy Alliance, the low-profile group of liberal mega-donors who helped create build the Center for American Progress and other new organizations that grew in the Bush years.

I’m not sure this was the best slogan. Suggestions?

Oh No!! The tea shirt is perfect. However now somebody needs to come out with 'f*ck tea' branded bottled water with all donations going to the tea party movement. More than one way to dilute a progressive movement 🙂

Well this certainly proves the depths the progressive intelligentsia really work at. Rather than using rational or intelligent debate, it is better to crawl into the gutter. The shame of it is how effective this campaign might be.

What the heck happened to the Coffee Party? Did it go the same route as Air America?

How about the following T-shirt for Conservatives:

"I think, therefore I'm too smart to be a Liberal"

Too many progressives (and other people) enjoy drinking tea. No go.

Something about teabaggers would still be obscene and insulting, as well as more to the point. Or a "yo mama" joke.

She's a know-nothing nobody with nothing positive to contribute.

I do not believe in coincidences.

Coffee Party of the United States of America.

I hereby offer:
"Foricate camellia sinensis and the equus it rode in on."
This is of course for the ivy league version.

"Too Much Tea Makes You Pee"

see http://www.iowntheworld.com blogsite – they already have an alternate tee up for your viewing pleasure.

So if I come across some hottie wearing that shirt I can state "Cool, you're wearing your f*ck tea. Let's go!!"

These people are collage educated and this? THIS? is the BEST they can come up with???

Having no ideas, they resort to profanity.

My mama always taught me that only ignoramuses with no vocabulary resort to dirty words because they're short and easy to remember. Big words are too hard.

Although I question the statistics they provide it actually does them more damage. Apparently a large percent 43% did not think Bush was a good President.

They claim 32% support violent action against the US is justified ? How many of these same wackos defend Bill Ayers ?

45% think abortion laws should be stricter? Sounds in line with the national polls.

This F Tea project just proved the Tea Party has lots of independents.

"Fornicate with camellia sinensis and the equine conveyance upon which it obtained ingress."

Or is that the C. Montgomery Burns version?

Erica Payne's personal motto:
"I'd walk a mile, for one of your smiles … and some Johnson".

Erica Payne must do her research in the FAQ queue.

Also, can we now wear shirts that say "Erica Payne is a C*NT" as the oh-so progressive left did with Gov. Palin?

As an Althouse commenter pointed out, the Boston Tea Party members were also the ones saying "F*ck Tea!" – they threw it in the harbor, gave the king the finger and told England where to shove it.

So the slogan is not exactly a ringing endorsement of big-government policy. It's exactly the opposite.

That's what you'd expect from a bunch of knee-jerk reactionary high school dropouts who never actually opened an American history book, though.

My answer, as long as electing a Dim means that Ms. Pelosi has any chance of continuing as Speaker:

F*cking Payne is a f*cking pain

I remember seeing the coffee party story run on the front page of CNN and thought it was CNN inventing news.

It's really really sad for our country that most major news outlets are as tied to the government's propoganda campaign as the old Soviet run news orgs.

Wear that in some redneck parts of the South, and it'd be easier just to print "kick my ass first".

This is the perfect slogan for the Regressives. They don't have a philosophy these days, just a posture. They are not about anything. They are simply "not" the uncool people. Their entire focus is on insulting, ridiculing, shaming, bullying and elevating themselves by sole means of demeaning others. They need Sarah Palin and others to define themselves, because they do so only negatively. So, this t-shirt actually is the perfect summary of their entire worldview.

Filthy language, no words with more than one syllable, anti-intellectual – and no ideas the voters will go for.

Fits the "progressive" mindset perfectly. Go for it, Erica Payne!

I rather like the description of them as "collage educated".

A mishmash assemblage of supposedly interesting and "cool" ideas, with an increasingly ugly result as each new piece is pasted on.

This is the most juvenile thing I've seen in a while. Is this supposed to be representing a new Liberal 'movement' like the coffee party, or that silly Latino Liberal movement?

What do they have against Earl Grey? LOL!

I'm wondering about the value of an Ivy League college education.