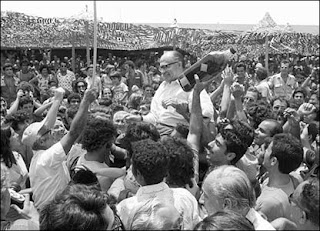 I almost forgot that today is the anniversary of another liberation, the Israeli commando raid to free hostages of PLO terrorists in Entebbe, Uganda. Thanks to @KurtSchlichter for the reminder.

The leader of the commandos, and the only Israeli killed during the raid, was Yonatan Netanyahu, brother of the current Israeli Prime Minister, Benjamin Netanyahu.

Dora Bloch, one of the hostages was not rescued because she had been moved to a hospital, and was later killed on orders of Ugandan dictator Idi Amin. Three other hostages were killed.

For a wonderful account of the raid, I highly recommend 90 Minutes at Entebbe.

Photo above right of then Likud Party leader and future Israeli Prime Minister Menachim Begin being lifted in the air as Israelis celebrated the hostages return.

Imagine the international outcry were this to happen today…

Are you sure that picture is associated with this event, William? Yitzhak Rabin was Prime Minister during the Entebbe raid. The picture is of Menahem Begin, and it may actually be the celebration of the bombing of the Iraqi nuclear reactor in 1981, which was during Begin's tenure.
Just wondering.

@David – The photo is from the aftermath of Entebbe per the BBC link in the post, but you are right, Begin did not become Prime Minister until a year later, so I have corrected the post.

It's a small detail but I don't generally trust BBC when it comes to accuracy about Israel. In 1976, Begin was in opposition and would have had little, if anything, to do with the decision-making about Entebbe. I seem to recall similar celebratory pictures after the Iraqi reactor raid in 1981 – that took place in the midst of a tight election campaign and, hence, good reason for Prime Minister Begin to be present at an emotional outdoor rally after the news was announced.

I had also forgotten about this very important event.