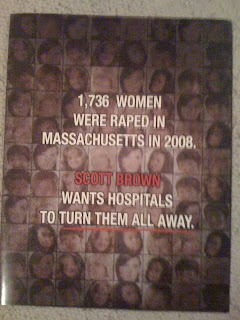 We have seen this tactic before.

Last January, Democrats in Massachusetts sent out a mailer accusing Scott Brown of wanting to deny medical care to rape victims, because he had introduced state legislation providing health care providers with a religious conscience exemption to providing abortion-related services, so long as alternative arrangements were in place.

The provision proposed by Brown was almost identical to a provision which was in the Democratic health care bill crafted by Harry Reid.

Since such exemption would have applied even to circumstances where the abortion services arose out of a rape, the Democrats played the political rape card by sending a mailer claiming that Brown wanted rape victims turned away from hospitals.

Now we are seeing the rape card used against Sharron Angle because she is pro-Life.

On mulitple occasions, Angle has stated her personal belief that abortion is not justified because life starts at conception.  Since Angle’s view is that innocent life should not be taken, the circumstances of the conception make no difference.  As a result, Angle’s personal belief is that she would counsel even rape victims who become pregnant to consider carrying the child to term.

Angle’s personal belief is shared by tens of millions of Americans, and is the position of Catholic Church among others.

Predictably, Harry Reid’s supporters have tried to spin Angle alternatively as pro-rape or as someone who wants to force her view on rape victims.

But nothing Angle actually has said supports such conclusions, any more so than Scott Brown proposing a religious conscience exemption made Scott Brown pro-rape or hostile to rape victims.

Is Harry Reid pro-rape and hostile to rape victims because the health care bill has a religious conscience exemption which would apply even in cases of rape?

Playing the rape card is about as low as it gets.  But then again, when the goal is to “vaporize” your political opponents, nothing is beyond the pale.

For liberals, 2 wrongs make a right. Harry Reid may have signed on the the health care bill, but it doesn't mean he liked it. It was just a start, a foot in the door. That conscience clause is actually an unplanned nuisance that Reid will attempt to abort when he gets the chance.

If Sharon Angle is personally against abortion but would continue to allow it to be legal, then she should say so.

What she's said so far when specifically asked about abortion is that she's against it. Period.

The irony here is that as a practicing Mormon, Mr. Reid's views on abortion should line up exactly with Ms. Angles.

There are many that use religion as a cover trying to get elected. Harry Reid. He is as worthless as the others. Fire him!