Harry Reid Needs To Answer For This CBO Report

Harry Reid Needs To Answer For This CBO Report 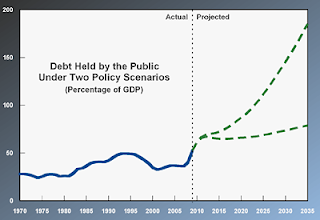 Sharron Angle has come under withering fire from Harry Reid’s campaign and its operatives for highlighting the need to move away from the entitlement state in favor of policies which foster personal choices and responsibility.

Yet a budget report just released by the Congressional Budget Office proves that the entitlement state is putting us on a path to fiscal ruin, and that government has no answers.

The short story of the report, and what is generating many of the headlines, is that ObamaCare will do little if anything to reduce deficits and national debt, even using the contrived assumptions Harry Reid required the CBO to use in its “scoring” of ObamaCare.

The bigger story is that the CBO presents an “alternative” projection, using more realistic assumptions than included in the CBO’s health care and budget projections, predicts disaster (emphasis mine):

The budget outlook is much bleaker under the alternative fiscal scenario, which incorporates several changes to current law that are widely expected to occur or that would modify some provisions of law that might be difficult to sustain for a long period.

In this scenario, CBO assumed that Medicare’s payment rates for physicians would gradually increase (which would not happen under current law) and that several policies enacted in the recent health care legislation that would restrain growth in health care spending would not continue in effect after 2020. In addition, under the alternative scenario, spending on activities other than the major mandatory health care programs, Social Security, and interest would fall below the average level of the past 40 years relative to GDP, though not as low as under the extended baseline scenario. More important, CBO assumed for this scenario that most of the provisions of the 2001 and 2003 tax cuts would be extended, that the reach of the alternative minimum tax would be kept close to its historical extent, and that over the longer run, tax law would evolve further so that revenues would remain at about 19 percent of GDP, near their historical average.

Under that combination of policy assumptions, federal debt would grow much more rapidly than under the extended baseline scenario. With significantly lower revenues and higher outlays, debt would reach 87 percent of GDP by 2020, CBO projects.

After that, the growing imbalance between revenues and noninterest spending, combined with spiraling interest payments, would swiftly push debt to unsustainable levels. Debt as a share of GDP could exceed its historical peak of 109 percent by 2025 and would reach 185 percent in 2035.

The lesson here is twofold:

First, the Democrats built assumptions into ObamaCare which were unrealistic, yet the CBO was forced to use those assumptions for its baseline projection. Harry Reid and other Democrats need to answer for this charade.

Second, government is not the answer. As long as we focus on what government can do for people, rather than enabling people to do for themselves, there is little hope. The entitlement mentality is a certain road to ruin.

The mainstream media mock people like Sharron Angle who point out that we need to figure out a non-governmental way for people to save for retirement and health care.

Yet, the CBO report shows that the Sharron Angles of the world understand the problem far better than the self-appointed budgetary intelligentsia who have set us on a path of fiscal destruction.

The CBO assessment is probably the most important economic report the President of the United States will read this year. And it should be a huge wake-up call for the Obama administration, which has so far adopted a policy of sticking its head in the sand in the face of an impending Greek-style financial crisis in the very near future….

With his reckless big government policies, Barack Obama threatens to run his country into the ground, with American decline the inevitable end result. It is not too late to reverse course, but so far there is not a shred of evidence that the president is willing to do what is necessary. Not only will the United States suffer from this kamikaze-style approach, but the world will too.

What the heck is wrong with the NRA? Red State says they hear the NRA is going to endorse HARRY REID and is dissing Angle. UGH! Have they lost their freakin' minds?