Why Is Harry Reid’s Campaign Spokesman Following Me?

Why Is Harry Reid’s Campaign Spokesman Following Me? 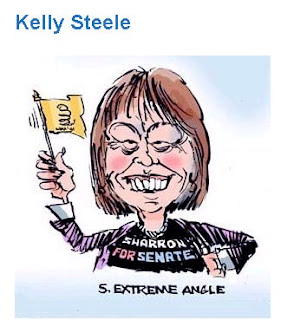 Kelly Steele is Harry Reid’s campaign spokesman and one of the chief strategists.

According to reports, Steele is credited with taking down Sue Lowden, and is in charge of the early efforts to paint Sharron Angle as an extremist and crazy:

And that’s where Steele factors in–to help Reid, as his team puts it, “vaporize” his opponent. He came aboard earlier this year, along with Reid’s long-time spokesman Jon Summers, who now splits time between the federal office and the campaign in Nevada.

A few days ago I posted that the difference between the Reid and Angle campaigns was that all Angle had to do to win was to tell the truth about Reid, while Reid needed to lie about Angle.

The second was Kelly Steele, who uses the Avatar in the image above right.

But I’m not sure Steele understands he will have to put up with such inane tweets as my best wishes to the nation of Ghana for further success in the World Cup, and my retweet of the following: 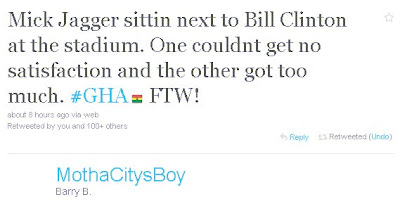 And of course, my retweet of Sharron Angle’s announcement that she had met her initial $1 million fundraising goal: 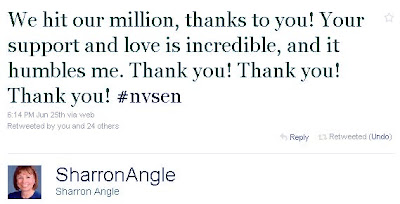 But then again, Steele probably isn’t too worried about money, since Reid is reported to have $17 million on hand, and he is expected to raise up to $25 million.

Considering the failed Stimulus Bill, ObamaCare, the Cornhuster Kickback and Louisiana Purchase, trillion dollar deficits as far as the eye can see, crushing national debt, “the war is lost,” “the surge has failed,” and a summer of cap-and-tax maneuvering, even $25 million cannot rehabilitate Reid.

Which is why it is Steele’s job to “vaporize” Angle instead.

Anyway, back to the title of this post. Should I be honored, or worried?

You made his enemies list, bravo! Feel honored. Sharron will need everyone's support.

Bored, I would be bored.

Honored? Worried? I dunno. But you could have some fun with it ;~)

Honored…and worried. These people will stop at nothing to destroy their opponents and protect their allies. They invented "the politics of personal destruction".

Watch your back. OTOH, I invite Steele to follow MY blog (http://deekaman.blogspot.com/), from which he will learn exactly….nothing.

Not worried, that's for sure. It just means that you're seen as a good source, and an effective one!!! However, it also shows that they are trying to glean all "secrets" and know what's going on with Angle up-to-the-minute. Beware – they will attempt to use you (i.e. your tweets) to attack her. Words, just words – that they will twist. Rule 13 is as familiar to these guys as the back of their hand!

But I know you will use your words carefully!! 😀

Doesn't Sharron have to start defending her own positions? If she is going to be elected Junior Senator to John Ensign, isn't there a time when she will have to run on her own ideas? After all, being the 100th most powerful senator does have its obligations.

At what point do we take the gloves off and treat liberals like the pond scum they are? Two can play this game! This is like fighting in Afghanistan, with one arm tied behind!

Only in America do the left fight their true enemies with both hands! Make no mistake conservatives are their enemies and have no doubt by hook or crook they will fight until they have placed their boots on our necks! When they push the button to shut down the internet, my guess is at that time one of two things will happen, conservatives will either lay down and submit……..or show them what a real revolution looks like! The thought of a real revolution sickens me……. my generation has failed, to think of the Greatest Generation and what they went through! They placed the reins in our hands, and we failed to understand what they sacrificed! If freedom fails here, it fails everywhere!

Forgive me this one small rant, my problem is I love my country and the people. The left seems to hate everything we honor! They hate freedom but they do love control! The left is truly evil and with evil intent they will control our destiny, our future, and our children if we allow it!

I read these articles daily and with each and every topic, I watch the same reactions to each bite the left takes of our freedoms, where and when does it stop? The old Democratic Party is gone, all that is left are radicals, I should know I was a Democrat for 25 years! It's time to draw that line in the sand….the bull shit stops here!

If you're worried, block her/them. They're just trying to get an idea what's going on in the Angle camp–there was a lot of that going on in the final weeks of the Brown campaign, too. It didn't help Croakley, either. heh

They may have just decided to follow the top 20 conservative blogs. I'm sure they where watching these parts anyway, so following you directly on Twitter is a signal of some kind, rather than a statement of true intention.

Honor or worry? Neither. It is an ant scurrying across the sidewalk. Your eyes see it, your brain hardly notes it, you move along utterly unaffected by it.

I forgot to mention, if Harry Reid happens to read this post, I want to assure him he is the lowest of the low, most un-american, Constitution and Bill of Rights shredding on-the-take lifetime government statist pondscum thug visible to the public spectrum. I am sure there are worse than Harry Reid in politics, but you have to tear the rotten trash bag open to expose such fat maggots. I say this based on his policies, voting record, and actions in government of which I am aware of which a partial list is found here – [url]http://www.ontheissues.org/senate/harry_reid.htm[/url]
Research this subhuman and see what you think of his lifetime commitment to the overturning of American fundamentals and his own personal enrichment.

Now I'm confused. Why is Kelly Steele using an image of Janet Reno as his avatar?

As I see it, with all the face time that $25 million would buy Reid, that would assure that Angle would be elected. Most people that I know have an intense hate reaction when they see Reid.

Apropos of what Angle and her supporters should be doing every day, if it's true that Reid's Congressional flack, "Jon Summers…now splits time between the federal office and the campaign in Nevada," that's against the law, and also would strike most voters as an unfair use of tax funds. It may seem like a small thing, but it helps build the narrative of Reid as a spoiled Washington insider unconcerned about government expense — and small things add up.

I think you should be honored. They are likely watching you because they know how effective you were in rallying people around Scott Brown.

They're the ones who are worried. They're scared of what you might dig up and don't want to be blindsided when you either post something damaging to Reid's campaign (if he can be damaged further) or beneficial to Sharron Angle.

I think MaggotAtBroad&Wall on June 27, 2010 at 7:28 PM, hits very near the mark … your very early recognition of the potential of the candidacy of Scott Brown put you on their “to do” list, and I think for good!

As if your mere recognition of Coakley’s vulnerability were not bad enough, you then proceeded to keep it up . . . you even had the temerity to both practically and intellectually rally support for Brown’s cause, including by visiting and reporting back from Scott Brown’s campaign headquarters about how well things were going!

But for many lefties, I think the real kicker is that you are a law professor, one who is cogitating and imparting knowledge under the umbrella of a prestigious eastern university, no less, and who is simultaneously quite openly and actively consorting with the "enemy!"

That fact has to put you quite high up on their list. That would cause you to be followed!

So, I say forget about the so-called TownHall list — "The 100 Americans the Left Hates Most!"

That is a list made up by and for some on the right. While it does not mean that many choices are not correct, it does mean that the potential for misjudgment or oversight is significant.

I see little no evidence whatsoever that anyone on the left was consulted in the preparation of that list, for example, nor even any indication of polling of the progressive base done to find out who they really hated and feared.

So, how did the author or authors of that list know who the left really fears and hates? It is anyone's guess.

To me, the fact that they curiously eliminated anyone who is not an American citizen seems quite, well . . . arbitrary and capricious, to borrow a phrase. How could Mark Steyn not be on such a list, for example? Were the Marquis de Lafayette and Tadeusz Kościuszko not both great American Patriots?

My sense is that the larboard-leaners themselves do indeed remember Tom Foley. And, they intrinsically know that anyone who goes squirrel hunting for their leader is a person to be loathed and despised, like no other! Mind you, some of those folks may themselves even harbor feelings of true disdain for dirty Harry. But that does not excuse anyone from the center or the right giving an assist in his political demise!

So, why do they "follow you?" I say it’s because you are on "their list," both for what you "did" to the Martha Coakley campaign, and for what you might similarly be at least partially responsible for in the case of Harry Reid.

Robert Costa at the Corner tells us:

Later today, Angle will answer questions from journalist Jon Ralston on Face to Face, Nevada’s own version of Meet the Press. You can watch the interview live, online, at 9:30 p.m. EST, here.