Sheldon Whitehouse has taken to the floor of the Senate again to accuse everyone who opposes driving the country further into debt of being against people who are suffering financially.

But that accusation, much like Whitehouse’s accusations against opponents of ObamaCare, is based on a false history.

The reason unemployment and other benefits are not being extended is because Whitehouse and his fellow Democrats refuse to pay for the benefits by cutting bloated programs passed by Democrats, such as the Stimulus Plan and ObamaCare:

But the $35 billion that would be added to the deficit is still too much red ink for the liking of Republicans, who have denounced it as the “debt extenders” bill.

“They will not pass a bill unless it adds to the debt,” the top Senate Republican Mitch McConnell said of Democrats earlier today on the Senate floor….

But it’s not only Republicans who have opposed the bill – Nebraska Democrat Ben Nelson has, too. And just last Friday, the Senate managed to pass the “doc fix” alone, but House Speaker Nancy Pelosi quickly shot down the abbreviated version as “inadequate” and vowed not to pass it until the upper chamber included jobs legislation in it.

Whitehouse and other Democrats have broken the bank. Instead of being fiscally responsible, Whitehouse compares apples to oranges, by comparing annual deficits/surpluses under Clinton with gross national debt under Bush:

“I understand the point about the debt and the deficit and the spending,” said Sen. Sheldon Whitehouse (D-R.I.). “But to me, that doesn’t have an enormous amount of credibility, because when President Clinton left office, he left an annual surplus… At the end of [George W. Bush’s] term, we had $9 trillion in debt.”

The Democrats could extend unemployment benefits and pass a Doc Fix if they wanted to, but they prefer increased debt to trimming their agenda.

Democrats are responsible for holding Americans financially hostage to their big government programs, and should not try to blame those who are trying to bring about some small measure of fiscal sanity.

Update 6-25-2010: I missed this mistake in Whitehouse’s speech. He claimed that there were a Democratic President and a Democratic Congress at the end of Bill Clinton’s term, but that is not correct. The Congress was Republican, and as we all know, the budget surpluses in the 1990s were a combination of the post-Cold War peace dividend (i.e., cut in defense spending) and Republican Contract With America. As reported by PolitiFact, Whitehouse was wrong: 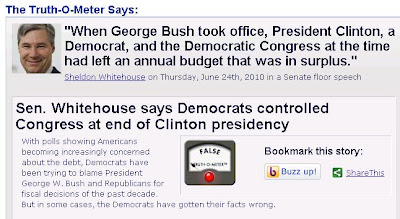 I am sick and tired of my fellow americans being denied their right to a free pony.

Ahhh, now the left side of my brain gets it! We can increase the deficit as much as we want so long as Republicans don't have any credibility.

I'd love to see Obama use that line to the Chinese. "Umm yes, you see, we aren't paying you back because Republicans do not have credibility and they hate unemployed people"

I hate this bastard.

He won't be happy until the entire nation is living somehow on perpetual welfare just like the state he represents.

He is one of the most dishonest and dishonorable men in the Senate, and that's saying something.

So, after over 200 years of wild and uncontrolled government spending, it took only 18 months of Obamanomics to increase the national debt over 140%.