Thanks to Solomonia for posting this 1956 cartoon about Israel’s aggression. (Added) The cartoon shows Egyptian Gamal Abdel Nasser repeatedly taunting Israel’s David Ben-Gurion, and in the last segment Ben Gurion finally hits back. The cartoon appears to be an allusion to the 1956 Suez Crisis.

With Turkey, Iran, Syria, Hamas, Hezbollah, and the rest of the Islamist-Leftist Coalition spoiling for a fight, this cartoon captured the eternal international hypocrisy which existed 50+ years ago as strongly as it does today: 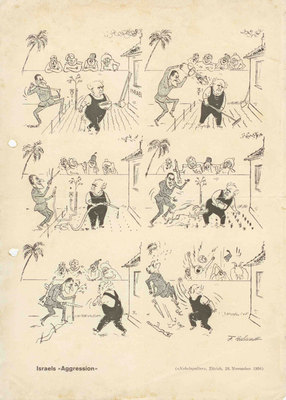 As the old saying goes, "The more things 'change,' the more they stay the same." Isn't that the truth! Perfect illustration of then and now. Unfortunately, now the US, with The Won's policies and statements, and the UN are on the side of the crazy neighbors watching on the sidelines. That IS "change" – yet another broken campaign promise. Just how many campaign promises did BO break again? I've lost count.

This reminds me of a joke:

An Englishman, a Frenchman, …, and an Israeli are captured by cannibals. The cannibal leader offers them one last wish before being slaughtered for the pot the following morning. The Frenchman wishes for a goumet meal, fine wine, and a beautiful woman. The other nationalities asked for appropriate stereotypes. The Israeli asks the cannibal chief to kick him in the rear. Puzzled, but forced by the tribal custom, the cannibal chief does so. The Israeli pulls out an Uzi and slaughters the cannibals.

The others ask the Israeli why he did not pull out the gun and rescue them before. The Israeli answers – "I did not want to be condemned for aggression".