We Are All Gillian Duffy Now

We Are All Gillian Duffy Now 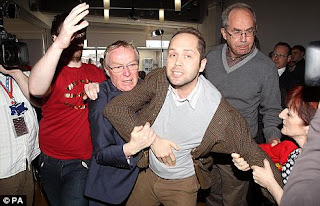 Gordon Brown is feeling the wrath of the little and not so little people in Britain, after he called Gillian Duffy a “bigot.”

Now things seem to be spinning out of control, as even a Dean at Oxford University has heckled Brown for making the “bigot” comment:

GORDON Brown’s attempts to rally the Labour party faithful have faltered amid chaotic scenes in Wearside.

Julian Borthwick, 38, was manhandled from the room by Labour activists after interrupting Mr Brown’s speech with his reference to the Gillian Duffy row.

The Prime Minister’s police protection then escorted him from the property as party supporters cheered Mr Brown off from the event at the National Glass Centre in Sunderland.Mr Borthwick, an Oxford law graduate, had heckled the premier with comments including “we’re broke“ and “what about that bigoted woman?” (photo here)

Here is the heckler’s bio and photo from happier times:

With degrees in Theology, Law & Computer Science, Julian is well placed to ensure that Chambers’ IT & telecoms provision is first class. He thrives by engaging with the nub of any technical challenge and is Prince2, MBCS and MCSE accredited . He has been co-opted to the Bar Council’s IT Panel and serves as IT Fellow and Dean at St Benet’s Hall, Oxford University. He particularly enjoys his walk to Chambers each morning, with fine views of the Thames and the Middle Temple from the Blackfriars Bridge.

It appears that all the Gillian Duffys are fed up with Brown.

She is the voter who dared to raise the issues no politicians wanted to discuss – and derailed Gordon Brown’s election campaign in the process.

Gillian Duffy, a pensioner from Rochdale, was called a “bigot” by Gordon Brown after she questioned him over immigration and the economy.

The Sunday Telegraph contacted Mrs Duffy’s namesakes around the country in a unique test of voter opinion.

We found a group which had largely voted Labour in 2005 who were now mostly undecided ahead of Thursday’s election.

They are concerned about education, pensions, care for the elderly, immigration and health.

But they are also, on the whole, disillusioned with the political process.

Can charges of racism and Nazism and Apartheidism be far behind?

Maybe they will try to "Joe the Plumber" her and leak private and confidential information about her business, personal life to discredit her questions and distract people from the real issues she presented. Since the left is taking on the Obama mantel of politics of destruction bet they go after the little old lady after all.

London, Jan 18 (IANS) One in 10 children in Britain lives in a mixed-race family, raising hopes that future generations “will not see race in the way we see it”, a major study revealed Sunday.Mixed-race relationships, including between Indians and whites, are now so common that some ethnic groups – starting with African-Caribbean – will virtually disappear, the research says.http://www.thaindian.com

he Muslim population in Britain has grown by more than 500,000 to 2.4 million in just four years, according to official research collated for The Times.

The population multiplied 10 times faster than the rest of society, the research by the Office for National Statistics reveals. In the same period the number of Christians in the country fell by more than 2 million.

Experts said that the increase was attributable to immigration, a higher birthrate and conversions to Islam during the period of 2004-2008, when the data was gathered. They said that it also suggested a growing willingness among believers to describe themselves as Muslims because the western reaction to war and terrorism had strengthened their sense of identity.

This election will be muddy and the outcome will not clarify many matters either.

There are so much to be talked now about Gillian Duffy and Gordon Brown. But I can't really understand why is so much attention towards G.Duffy. Looks like some of Mr. Gordon Browns words are in some way true. In my opinion she is just using the situation and wants become to be famous. What will come next? Book released by G.Duffy?
It seems in this country most not welcome are Eastern Europeans. I been trying to comment on timesonline.co.uk but my comment wasn't approved. The comments on Milena Popova's " This disenfranchised eastern European will receive no apology" article in guardian.co.uk are also suspended and many of them removed. Sadly, but the facts speaks for itself. I'm myself Eastern European living and working in London. To the attention of Gillian Duffy there are no boards and is free movement within EU. All the Eastern Europeans are mostly honest and hard working people only very few claiming benefits. But there is much bigger percentage of Asian and African immigrants and the question is how they getting to the country. Message delivered by Gillian Duffy was clearly addressed particularly to Eastern Europeans. For me this is abusing and very discriminating. I think G.Duffy should be charged for discrimination and not showed as a victim. In this case victims are Eastern European community in UK.
Although I will vote for conservatives in this case I'm 100% supporting Mr. Gordon Brown and can't see any reason why he should apologise. The only person who should apologise in this situation is Gillian Duffy.
It's very sad that in this multicultural country only the Eastern Europeans are not welcome.

The problem is mass immigration – into England (is that name still allowed to be used?), into Canada, Australia and the USA.

All these fine nations have historically been mostly caucasian, Christian countries. Mass immigration, pushed by the political elites in each country is changing this history rapidly.

"Diversity", "multi-culturalism" is nothing but clap-trap to me. Weasel words for weasel people. England should be English; France should be French, Italy should be Italian.

The US, Canada and Australia, all being nations that were started by English colonists/settlers, have a responsibility to the still vast English speaking, Caucasian majorities, whether or not they want to be "transformed" by the political whores.

Immigration is fine, in small numbers but when it becomes a reason for being or reason for existing, it needs to be stopped, reduced, the scales need to be re-balanced.

Is there a more frightful example of the effect that socialism has on advanced societies? Britain's social structure and economy were destroyed in the polling booth as the British people voted for more 'rights' and more of other peoples money. They have nobody but themselves to blame for their problems, if indeed they're even aware they have a problem. What's important is that we don't steer the same course.

As Mark Steyn puts it: "Gillian Duffy lives in the world Gordon Brown has created. He, on the other hand, gets into his chauffeured limo and is whisked far away from it."

"In my opinion she is just using the situation and wants become to be famous."

Wow. Because everyone who gets trash-talked by a politician is just a publicity hound?