The Atlantic Has A Mess On Its Hands

The Atlantic Has A Mess On Its Hands

The Atlantic Magazine thought it would be able to speak poetic historical justice, by splashing the headline that the original reviled one, Kenneth Starr of Monica and Bill and Blue Dress and Impeachment fame, had been arrested for running a Ponzi Scheme.

Oh, the deep, deep satisfaction. They could feel it. But it was premature. And now The Atlantic editors have a mess on their hands.

Turns out that on the internet there is more than one Kenneth Starr, and the arrestee was not the tormentor of Bubba, but some guy with the name Kenneth Starr who ran a ponzi scheme.

You see, even crackerjack journalists sometimes forget that in the billions of people in the universe, there is a chance that two such people have the same name. And at Columbia School of Journalism, there is a special course on fact checking using Google and Yahoo. But someone at The Atlantic didn’t take that course.

Here is The Atlantic’s original announcement and correction:

Somewhere, Bill Clinton is smiling. One-time special prosecutor who uncovered the dirty details of the former President’s affair with intern Monica Lewinsky has been engaged in some bad behavior of his own, according to the Justice Department and Securities and Exchange Commission.

Correction (~3:18pm): Apparently there are two famous Kenneth Starrs. The one charged is an investment advisor to the stars, but not the former special prosecutor. Apologies to Bill Clinton if we got his hopes up — and to the other Kenneth Starr.

I hope The Atlantic has learned a lesson all victims of fraud must learn: If it sounds too good to be true, it probably is. 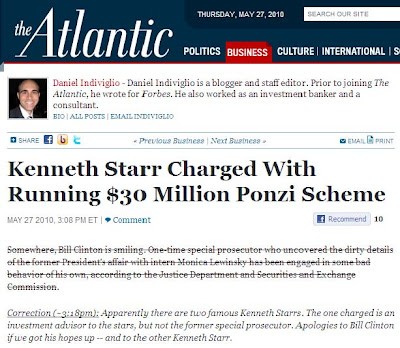 You mean someone found out the truth about Social Security?

Reminds me of the traffic reporter named Amelia Earhart that we had here in Denver.

You mean there are TWO Atlantics with messes on their hands?!! Why does this smell like a clever ploy by evil genius Dick Cheney to cover the trail proving he blew up that BP oil rig?

If their own internal morals were not so terribly warped, they might have a hunch that there must be some explanation. The integrity of the Special Prosecutor is such as to suggest that he probably would not do this, so another explanation really should be sought. But again, relying on their own internal morals as a guide, they see no contradiction at all; they know that they could play both roles quite easily. Integrity is just a meaningless word to most Liberals. And so they readily assume it must be the same man.

Honestly, I keep expecting Scooby and Shaggy to pop up somewhere with some of these characters and their sinister plots the libs keep dreaming up.

I don't see this as a problem for the Atlantic at all. They'll do what Liberal Progressive publications and media outlets always do: Issue a lame correction and get back to the business of promoting Liberalism and lying about stuff.

So the MSM is inadequate and wouldn't know true journalism if it was right in front of them. I am in shock, really in shock!

But, everyone makes mistakes. Props to the Atlantic for leaving their error up with the correction, rather than just sending it down the memory hole.

What an appalling and obnoxious correction. Apologize first to Bill Clinton and oh yeah, to the guy they slandered, too. Somebody ever runs a headline and story falsely accusing ME of a crime, and their apology better be a damn sight better than that!

And it's legally stupid, because it is at least some evidence of actual malice. Running with the story itself could well be actionable… not checking to see if there are two people by the same name smacks to me of "reckless disregard for the truth," all by itself, and their tepid and mean-spirited correction suggests that animus to former Solicitor General Ken Starr was the motivation for their failure to fact-check the initial story.

What a bunch of idiots at the Atlantic–but wait, don't they employ Mr Andrew Sullivan? And did they employ Scott Beauchamp (of making crap up fame?)
This is the mainstream media with layers of fact checkers and editors–who apparently can't find their butts with both hands in the dark.

It's odd how far out of the loop The Atlantic is- they probably think Hollywood is right wing; hence anyone there might take investment advice from Kenneth Starr, reviled among lefties for going after beloved President Clinton.