It has been eight days since the Governor of Arizona signed the immigration law. A few tweaks have been made in the wording of the law since then, but the essence of the law remains the same:

Illegal immigration is illegal and will be treated as illegal, and the laws setting forth that illegality will be implemented in accordance with longstanding practices for determining citizenship and immigration status based on a constitutionally acceptable “reasonable suspicion” test.

A law which was not extraordinary, except to the extent that it signaled an intention to take the immigration laws seriously, was met with a crescendo of accusations of racism and Nazism (with a dash of communism and Apartheidism thrown in to spice things up a bit).

It really is hard to remember any event which has caused this level of vitriol, hyperbole and outright fabrication.

It’s as if the Gods of the Race Card conspired with the Gods of Godwin’s Law to create a noxious stew of false accusations of racism and Nazism for political gain.

Not all of those seeking political gain were on the left. Connie Mack (R-Fla) also engaged in shameless accusations that the law was the equivalent of Nazism.

And not all of those who criticized the law did so by using the race card; there were legitimate libertarian, civil libertarian and other concerns which were not expressed in the form of the race card or amid accusations of Nazism.

But by and large, the overwhelming majority of voices heard against the Arizona immigration law sought to use false accusations of racism and Nazism for political gain.

I’ve said it before, and I’ll say it again. The core issue is whether we want to enforce the immigration laws, or not. There is nothing racist about that, unless one views our sovereignty as inherently racist.

Let’s have that debate.

But that is the debate the race-and-Nazi card-playing critics of the Arizona immigration law do not want to have, because the inevitable result is to expose their open borders policy position which is untenable politically for them.

And that is why the race and Nazi cards have been played so aggressively this past week.

To prevent a debate on immigration policy, to paint anyone and everyone who supports enforcing the immigration laws as racist, and to obtain de facto open borders through neglect.

Now if only they would be so honest as to admit it.

Update: A similar point is made in Praising Arizona:

The Arizona law is not about race; it’s not an attack on Latinos or legal immigrants. It’s about one thing and one thing only: making immigration enforcement a reality. It is time for a national debate: Do we or don’t we want to enforce the country’s immigration laws? If the answer is yes, the Arizona law is a necessary and lawful tool for doing so. If the answer is no, we should end the charade of inadequate, half-hearted enforcement, enact an amnesty now, and remove future penalties for immigration violations.

This photo of Arizona Governor Jan Brewer depicted by protesters as a Nazi, via Don Surber via JammieWearingFool: 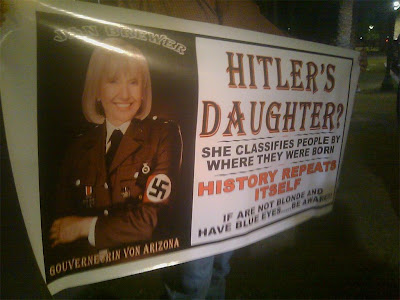 ——————————————–
Related Posts:
Saturday Night Card Game
Do NOT Read This Supreme Court Decision
Obamacare Requires You To “Show Your Papers”

If you actually read the law (some 300 words) you cannot use racism with a straight face.

You hit the nail on the head. There's been a lot of bluster over the years about the need to do something about immigration (illegal), and now that somebody actually does something about it (i.e., enforcement), the left has a cow. You're right, its NOT about discussing the issue.

That's an odd juxtaposition – expecting people who lie to somehow be honest.

"She classified people by where they were born…"

Weren't Jews classified by their ethnicity/"race" rather than place of birth? I don't think that analogy holds up very well…

When can we start being honest and talk about the true racists in this battle, the elite ruling class of Mexico? Last I checked, there are three distinct ethnic groups in Mexico: Amerindian, Mestizo (Amerindian-Spanish) and white. When Rev Sharpton talks about "being brown," he isn't refering to the whites or Mestizos, he's talking about the indiginous Amerindian population, the ones who are hopping the border into our country. These are the people that cannot get jobs in Mexico, and feel the need to break the US laws. Working for a large computer sales company, I see plenty of white and mixed Mexicans come in the store and spend thousands, yet the "browns" come here to work. Funny how a single state enacts a law to protect the nations sovereignty as the southern country with harsher immigration laws wishes only to pawn off its "problem" on the US and chastise this country for enforcing its laws.

ok, can somebody tell me, after making "legal contact" how does a po establish legal suspicion and then ask for "papers", W/O taking into account someones race, creed, or color. Or you saying that a blue eye Swede will be asked at the same ratio of a brown skinned person?

Why do you link to "the other mccain"?

@BUCK, it is simple to answer after making legal contact stopping a vehicle for speeding the driver has little or no spoken English. The driver has no license or other identification of any kind at the same time. The officer then decides to take said individual into custody for an immigration check. It is then determined ICE that this individual is in fact an illegal alien and he is transferred to a facility for deportation back to China.

No one is pointing out the fact that close to 40% of illegal aliens are Asian, African and Europeans. This law doesn't just work against Latinos as they claim and try to make everyone believe. They are the majority, but they are not the only ones that will be affected by this law. Apply common sense to the equation rather than emotion and this law makes more sense than any that my home state of NY has enacted recently.

I thought references to Nazism to demonize one's opponents were verboten according to democraps. Or is it only that accusations against democraps saying they're socialists or national socialists (nazis) are off limits? (Rhetorical question). I find it curious that these open border advocates aren't calling for boycotts of Wash DC (or every state) because the Arizona law is modeled on federal law applicable in all fifty states (or fifty eight states if you're the President). So if the state law is wrong and requiring a boycott the federal law would require a boycott of Wash DC as well.

I am amazed that this sign in the update was made so quickly, and that the printer had no trouble making it…….unlike the Tea Party and Conservatives, who make their own signs, and DON'T use Nazi photoshopped banners like this one.

The MSM, of course, says nothing about this. The only fascists (national socialist types in particular) that I am aware of today are on the Left. Projection, perhaps!?

"Why do you link to "the other mccain"?"

Because he had something interesting to say on the matter?