The already racially-tinged attacks being launched against Lt. Gov Bill Halter in the Arkansas Democratic primary race took a turn for the worse on Thursday evening. An independent group heavily involved in the race released a mailer written in what appears to be either Hindi or Sanskrit, accusing Halter of outsourcing jobs to Indian.

The group, Americans for Jobs Security, previously attacked the Democratic primary candidate with television spots featuring Indian actors thanking him shipping jobs to Bangalore. The mailer may be even seedier.

Here is one of the mailers: 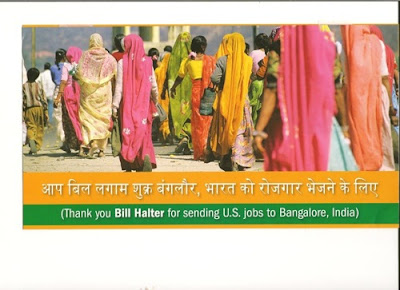 So why is this “racially tinged”? Isn’t use of that term really a cop-out for someone who wants to make an accusation of racism but knows he doesn’t have a factual basis for doing so?

“Racially tinged” is the linguistic refuge of race card players.

Was it racially tinged for Barack Obama to complain about jobs being shipped to India?

The issue of outsourcing is not simple, and can be twisted like many issues. But at least in the case of Halter, there was some factual basis for raising the issue. As reported by Stein:

The attack stems from Halter’s service on the board of WebMethods, a tech company that, as a way of trimming costs, opened up new offices in Bangalore, India in 2004 as opposed to within the United States..

To call the attacks “racially tinged,” however, was a cheap shot, or should I say, a weak hand to play.

Just like the allegations by The NY Times that the most famous campaign ad of 2008 was racially tinged:

On second thought, maybe this ad was racially tinged. After all, Obama was not really against offshore oil drilling.