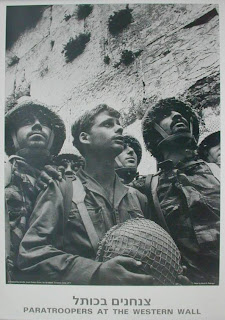 The Obama administration considers all territory Israel captured during the 1967 war to be occupied territory, including sections of Jerusalem.

Israel’s plan to construct new houses in a Jewish section of Jerusalem outside the pre-1967 border was the excuse the Obama administration used for the contrived crisis in March.

Now, it turns out that White House Chief of Staff Rahm Emanuel plans on celebrating his son’s Bar Mitzvah at the Western (Wailing) Wall in Jerusalem, which was controlled by Jordan prior to 1967.

The liberation of the Western Wall was one of the most emotional points of the 1967 war (photo right).

Some Israelis are upset that one of the architects of the Obama administration’s plan to re-divide Jerusalem wants to celebrate at the Western Wall, and protests are planned.

I feel for Emanuel’s son, and it is unfortunate that the father’s political actions are impinging on an important family event. Any threats made should be condemned.

But, there is an ancient Hebrew saying which addresses this very situation: “You can’t have it both ways.”

Echoes of Obama reducing the security monies for New York City and then flying there hours later for a fundraiser. Many fat cats and Wall Street types protested and did not show up. Face it, this is a man who disappeared into the Great Pyramid chewing gum. Yes, small tings are the tip off of larger sins. Centuries from now, historians will puzzle at the missing caricature on the wall because Obama left his gum there.

Now for Rham's excellent Bar Mitzvah adventure. Would Rahm do no less? Politicizing a religious event and passage is, indeed, not fair to his son. He is also putting his son in danger. Rahm should plan to have the Bar Mitzvah at the Arizona border. After all, the Mexicans consider us the occupier of their lands lost during the 1846-1848 Mexican-American War when Mexico ceded the Southwest to the United States.

If the US forces Israel to cede one inch of land, there goes Arizona.

I too feel for the child, but knowing 13 year olds, what will be really important to the child will be the huge party with his friends back home, not a visit to the Western Wall. What his children may also learn is just how much their fellow Jews- really despise their father. Real lesson in community.
Personally I have no idea what Emanuel is thinking. Did he really assume that just because he is Obama's chief of staff there would be no protests in the country he is helping to destroy. What made him think the the Jews are going to give him a free pass because its his son's bar mitzvah, when the children in Israel are celebrating their bar mitzvahs in the shadow of possible nuclear annihilation because of him and his boss.

There's another Jewish expression for Rahmbo, may he grow like an onion with his head in the ground and his feet (ballerina feet) in the air.

"But, there is an ancient Hebrew saying which addresses this very situation: 'You can't have it both ways.'"

Rhambo let his pride blind him to reality. Should Rhambo choose to follow through with his plans, his son will hopefully learn about the rich heritage the nation of Israel is preserving to pass on to him and all the future generations, and grow to love Jerusalem, God's chosen people, and their nation. Shalom.

Actually, doesn't talmidic reasoning cover this and many other such situations?

"Maybe yes, then again, maybe no?