I was waiting for this ruling, because I could not stand living in a world where it was illegal to wear baggy pants so low that your ass showed.

From Britain, our window into the future where underpants get to see the light of day (emphasis mine):

In a victory for skaters, hoodies and owners of oversized trousers everywhere, a teenager has won the right to wear his tracksuit bottoms halfway down his backside.

Ellis Drummond, 18, faced an antisocial behaviour order (ASBO) that included a ban on “wearing trousers so low beneath the waistline that members of the public are able to see his underwear”. It also prohibited him from wearing in public any clothing “with the hood up”.

But the bans were withdrawn after a discussion before a hearing at Bedford Magistrates’ Court on April 27, in which District Judge Nicholas Leigh-Smith said: “Some of the requirements proposed struck me as contrary to the Human Rights Act.”

Please take note of the wonderful acronym “ASBO”. That aside, I have to agree with the ruling because banning low baggy pants is racist, and inevitably sets youth on the path to criminality:

We tend to criminalize that which we don’t understand, and we tend to make laws that increase contact between police and inner-city youth. Laws like this start the cycle that sucks too many people into a criminal justice system they don’t need.

The following chart is courtesy of the Flint, Michigan police department. You have been warned, so move to Britain: 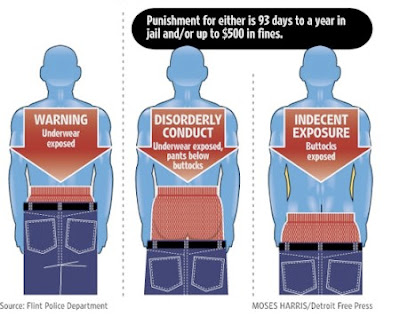 Does this mean we have to boycott Flint? Would anyone notice if we did?

——————————————–
Related Posts:
I Thought We Were Supposed To Be Boycotting California
Prattle, Twaddle or Drivel?

Not that it really matters much to the current urban youth crowd but when I was going to school back in the dark ages you didn't dare expose your underwear. One of your buds would give you a wedgie that would send you into next Sunday without a return ticket.

I got the impression that baggy pants syndrome affects males (from the article and chart). Wouldn't the banning of such pants wearing be considered sexist also?

Having spent some formidable years growing up in Flint I would have to say, no-noone would notice if you boycotted Flint. The people that live there would probably join in the boycott and happily move somewhere else if given the opportunity.

Well I am relieved. My plumber won't go to jail for exposing his crack while fixing my garbage disposal AND I won't have to miss the show.

On the other hand, low pants mean lower drawers generally that make other things less interesting. I guess you could say this is a catch boo hoo.

But to those who miss everything, women are now wearing skirts with paintings of their back ends wearing underwear on them as if the skirt were see-through. As if anyone cared about a painting. This is the age of reality TV BUTT also of Democrats killing transparency everywhere.

I just know my first comment was too, well, cosmic – you know – all encompassing. Here's the redacted version. Here's to good clean fun and happy thoughts about pants however you wear them.

There is another terrorist angle to this. Remember the "no fly" list? The underwear bomber and this latest terrorist were both on it. If you have a fly, you should be all set to go. Pants make a difference.

Not that I have any first hand experience, buy I understand that super-low riders in prison are consider anything BUTT ASBO.

And no, a boycott of Flint would not be noticed except for the rallies and marches protesting it as being racist.

Lets all pray that ASBO does not develop a similar concern over cleavage. Besides, the acronym wouldn't be nearly as entertaining.

i think the cops said

I hope that this sentence would be able for all the Countries that have ratified the Convention about Human rights.
Franco