Israel Is Not Liberal Enough

Israel Is Not Liberal Enough 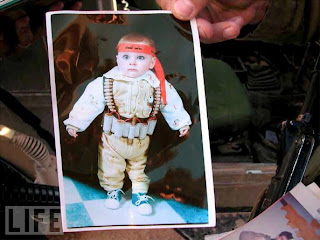 and American Jews have not done a good job at forcing Israelis to create the Middle Eastern version of the Upper West Side, or something like that, from Peter Beinart and the usual suspects.

You know what, they really don’t care what you think. And they will not change no matter what American Jews do. You figure out who “they” is.

Essays like yours, and those of the Medias Matters crowd, simply are viewed as small victories for those who seek the destruction of Israel.

Maybe what you call a failure of liberalism is a reality check. From people who have to live in the neighborhood.

But I do agree that we have failed to impart the younger generation with an understanding of the issues, as part of a greater failure of education on many different issues.

More at Israel Matzav, Maggie’s Farm, and The Other McCain, who asks this Exit Question:

Is it possible that the “anti-Arab racism” among young Israelis might have something to do with, y’know, Arabs blowing up young Israelis? Or is it “racist” even to ask that kind of question?

These self-described lovers of Israel who can find no merit in a democratic Jewish State that just doesn't let Jews die are a sad joke and an embarrassment to the rest of us. How convenient for the likes of Beinart and Media Matters, happily ensconced in their liberal and safe enclaves of suburban America to pass judgement on others. I have always said that when it comes to security Israel will decide for themselves what is best. It is their children that will die, the only thing that will happen to Beinart and his ilk is that the anti-semites in his world might not be happy that Beinart's children didn't died along side the Israelis. He is a fool of the first order.

You are also right about the lack of education among the Jews in this country. They rally around every liberal cause without bothering to learn the history and truth of any issue. They are frozen in their Judaism because they refuse to truly learn the history of the Middle East conflict because their leftwing friends might think that they are being too Jewish. Thank heaven for programs like Taglit and others that seek to redeem our chidlren from their stupid parents. Perhaps they can save a seat for Beinart's children for the future, since he is so worried about how they will perceive Israel in the future as they grow. They are going to need some sort of education since what they are receiving at their father's knee is devoid of any reality, history or actual thought provoking perspective.

Is it possible that the “anti-Semitism” among young Muslims might have something to do with, y’know, Israelis dropping white phosphorous on young Palestinians? Or is it “anti-Semitism” even to ask that kind of question?

If you think Israel has the right to expel all Arabs from the West Bank and let Zionist fanatics colonize all of it just admit it.

Gee AJB, ya think that lobbying rockets and planting bombs on buses might cause Israeli's to drop some WP? Any other country would have wiped the Arabs out. As for the settlements, what is your beef? When the Arabs get out of Kurdistan their protestations might be worth listening to.

In the meantime all things considered the Arabs should count their blessings that the Israeli's don't treat Arabs like Arabs treat themselves. As for expelling the Arabs from the West Bank, why not? The Saudi's and Kuwaitis expelled hundreds of thousands of Palestinians in 1991. The Jordanians expelled tens of thousands in the seventies. If the Arabs can't hold on to the land, that is their problem. Not ours.

Jews and Christians were forbidden from worshipping at the Cave of the Patriarchs in Hebron for 700 hundred years and Palestinian leaders evade answering whether they would be forbidden from doing so if PA gains complete control in the West Bank. Hebron is the second holiest site in Judaism, eclipsed only by Jerusalem. Yet these liberal Jews have so little connection to Judaism that they don't raise a peep about pali anti semitism and religious bigotry and imperialism. Why they must confuse Abbass with Obama.

Someone should explain to me how suicide bombers, unguided rockets, and assassination of civilians makes Arabs reliable peace partners. And how use of Phosphorus matters so in comparison to a bomb blast.