An Army of One

An Army of One

One of the perks of being a big time blogger (hah) is that sometimes people send me stuff for free. As in a free copy of Zev Chafets’ biography of Rush Limbaugh, An Army of One.

Which now occupies a hallowed place on my bookshelf next to two of my favorite autobiographies by other famous dissidents, Vladimir Bukovsky‘s”To Build a Castle – My Life As A Dissenter,” and Lev Kopelev‘s “To Be Preserved Forever.” 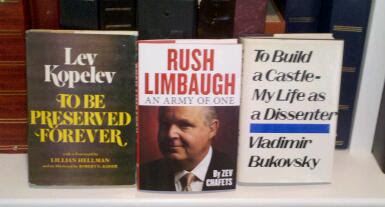 Update: WaPo assigned David Frum to review the book, and needless to say, Frum was not a real fan (of Limbaugh, he never really reviewed the book as such):

For one, Chafets exposes some disconnects between Limbaugh’s private life and public presence. Chafets has seen more of the pundit’s personal world than any other journalist, and reveals some distinctly grandiose tastes in this self-imagined tribune of Middle America.

The disconnect is on Frum’s part, who apparently does not often listen to Limbaugh’s show. Limbaugh frequently boasts about his wealth, even calling his commecial breaks “obscene profit” breaks. There is no secret here. It’s one of the endearing qualities Limbaugh’s listeners love that unlike Barack Obama, Al Gore and Thomas Friedman, Limbaugh leads his wealthy life without demanding that others don’t aspire to the same thing.
If I didn’t know this was a book review about Limbaugh, there is someone else much more historic about whom this sentence from the review would have applied:

It might seem ominous for an intellectual movement to be led by a man who does not think creatively, who does not respect the other side of the argument and who frequently says things that are not intended as truth.

As pointed out by David Graham, Frum is on an errant run:

WaPo assigned a harsh critic of Limbaugh to review a book about Limbaugh. What possibly could go wrong, did go wrong.
——————————————–

We have the video from the very last scene from LOST, the Series Finale posted now on Common Cents… kind of interesting!

You can't be serious. I know very little of Lev Kopelev and Vladimir Bukovsky's lives. I DO know, however, how many outrageous things Rush has said over the years. Has he been mistreated on occasion by the liberal media? Absolutely. Is he deserving of having his biography placed on a 'hallowed' place on your bookshelf? No chance.

Professor, I thought you represented the REASONABLE faction of conservative americans.

I'm jealous with envy (Lord forgive Me). People are sending you books to read? Most of the money I earn from blogging goes toward the purchase of new books for me to read up on. Now here is the "blogger goal" to achieve; free books sent to you.