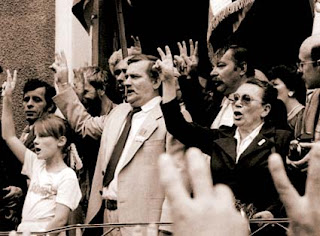 The more I learn about the people on board the Polish presidential plane which crashed outside Smolensk, the more I understand the depth of the tragedy for Poland.

Killed in the plane crash alongside Polish President Lech Kaczynski was Anna Walentynowicz.

Prior to the crash I was not familiar with Walentynowicz. Now I am, and I am beginning to understand.

Walentynowicz was to the Solidarity Movement in Poland what Rosa Parks was to the black civil rights movement in the U.S.

As Parks’ refusal to give up her seat on a bus was a spark in the fight against segregation, so too Walentynowicz’s refusal to accept her firing at a shipyard was the spark which led to strikes and the eventual collapse of the communist government.

Here is an excerpt from her obituary in the Times of London:

Anna Walentynowicz was born in 1929 in Rowne, in northern Poland, close to the Baltic coast. She was orphaned during the Second World War and in her youth joined the Polish Communist Party, which came to power with Soviet backing in 1947. She started work at the Lenin Shipyard as a welder in 1950.

But Walentynowicz soon became disillusioned with the corrupt and undemocratic way in which the shipyard was run. She is reported to have spoken out for the first time when one of her bosses stole money belonging to employees and used it to take part in a lottery.

By the mid-1970s, Walentynowicz — by now a crane operator — was firmly on the communists’ radar as a “political agitator”. She repeatedly raised workers’ demands and organised work-to-rules and began editing an illegal newspaper, even distributing it to her employers at the yard.

In 1978, she became a founding member of a Committee for Free Trade Unions set up in Gdansk. The shipyard responded by attempting to have Walentynowicz declared mentally insane, and she had to use the courts to fight to hold on to her job.

Her vindictive sacking in August 1980 was ostensibly because of her participation in illegal trade union activity, but was immediately seen by her fellow workers as the victimisation of a “model worker devoted to others”.

As a result of the strike not only was Walentynowicz reinstated, but further action led to the historic Gdansk Agreement with the communists and the formation of the independent Solidarity trade union. Within two years the union had ten million members.

The photo above right shows Walentynowicz with Lech Walesa.

——————————————–
Related Posts:
Obama Must Attend The Kaczynski Funeral
A Great Friend of the United States, Freedom, and the Jewish People
Tragedy Upon Tragedy As Polish Leadership Killed
Remember Katyn Forest

Yes. It's a huge loss! But u also need to know, what she told about Walesa for many years. They don't like eachother… Everybody knows that. Although that, all people, no matter what kind of site they are, cries like a baby, couse we all Lost without this people. You can't imagine… I don't know how we gonna ever go on… Still so many bodies are in Russia, still only 20(?) bodies they can recognize for sure… I… All my friends crying all the time… Sorry for my bad language… I speak much-much better.
Anna was our light and hope, she was opposite to many politics who clamed be one of Solidarność, but after 20 years they became one of this who hurted us – polish people – for many decades. It's hust to explain everything… You Americans still don't know about us… Our reality is like Orwell's story… still, it's nothing change for us, maybe exept a travel and things in markets o buy. But still many in goverment lies… Anna didn't. Never… And that's whay – i believe that – she died; like all the rest.