Finally, A Real White Supremacist Rally And Almost No One Notices

Finally, A Real White Supremacist Rally And Almost No One Notices 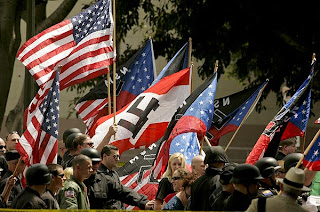 For two years, opponents of Obama’s agenda have been painted by the mainstream media, left-wing blogs and Democratic leadership as racist and extremist white supremacists.

The charges are malicious and false, as documented here dozens of times.

So what happens when there is a real white supremacist, neo-nazi rally? Almost no one notices.

As reported by the LA Times, a neo-nazi rally Saturday in Los Angeles drew a whopping 40 white supremacists and several hundred counter-protesters:

A rally of about 40 white supremacists Saturday on the lawn of Los Angeles City Hall drew hundreds of counter-protesters, sparked brawls in which two people were severely beaten and ended with crowds of demonstrators hurling rocks and bottles at police and departing supremacists.

Outside of the local media and a handful of blogs, the event received scarce attention. None of the usual suspects bothered to cover or comment on it. Firedoglake and Huffington Post covered it, but we saw none of the hyperventilated commentary and lecturing that is directed at Tea Parties.

There is a lesson here. The attacks on the Tea Parties have nothing to do with stamping out white supremacy and everything to do with shaping the political dialogue to stamp out legitimate opposition to Obama administration policies.

(Photo above right, what a real white supremacist rally looks like, via LA Times)

For the MSM it would appear that 'Nazi' is pronounced "not see."

Leftwing ideologues don't want to stamp out white supremacists. They need them too much for the scare factor.

The Tea Party, on the other hand, can fight back, so it absolutely must be stamped out.

While not a member of the tea party, I do sympathize with their attempt to get on the ballot. Even if they have a strong following within the Republican party, the party is owned by the corporations that own both major parties. But perhaps if Tea Partiers united with other third-parties, we could garner some real electoral reform to assist independents and third-party candidates get on the ballot.

Tea Party is not a third party, it is a movement back to constitutional limits on Federal power. If Republicans listen, and Democrats lose a few election cycles, both parties should vie for the Tea Party vote, developing their own proposals on how to reduce federal power to its constitutional limits. One way to do this is to propose constitutional amemdments to correct Supreme Court decisions that have expanded government power, such as a limitation on what consitutes of "Interstate Commerce".

Is Kevin an Eeyore? Hmmmmm……

The MSM is just too predictable. Don't cover the real hate groups, make up non-existant hate in a group that threatens their agenda.

Nothing to see here….move along…..

BlueDog has it right. "Not see" indeed.

BTW – I read on GatewayPundit that the Communists were beating up these neo-Nazis. Too frightening. History repeats itself. Germany in the 1920's and early '30's…..

I pray for this nation.

It's really shocking that the national media failed to cover a protest by *40* people? (obnoxious as they may be)

I just got back from a weekend stay in Skokie, IL, and to this day I still remember the news of the skin head rally in the late 70's (). But it is a nice suburb of IL, and if I wasn't just there, I wouldn't have that image today.

There is another lesson: don't get your news from one or a limited number of sources. Even God used four different humans from different backgrounds to write Christ's story. And if you are really unsure and able, attend one yourself as an observer.

I'm sure the Southern Poverty Law Center noticed and issued a report that there has been an increase in these groups. Of course they have said the same thing every month for the last 35 years which should mean the Nazis and right wing militia groups are 90% of our population.

Those numbers seem quite small for a rally in LA. However, I think the anti-demonstrators drew attention to themselves by infringing on the protesters rights of free speech. http://bit.ly/aaUkDn Your message isn't as strong when you break the law and get arrested.