DEBKAfile is an Israeli website which focuses on intelligence, military affairs, and Middle East politics. It is a must-read and is on my list of “Blogs I Read” in the left sidebar.

The site frequently breaks information about various intriques which we read about in the mainstream media only weeks or months later. Other times, it’s hard to know if the information is being put out there for some ulterior motive.

I was intrigued when the scrolling update in the sidebar read “Empty Post“: 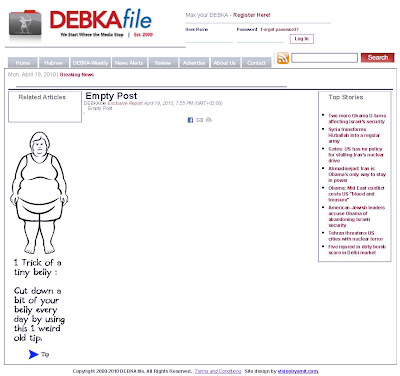 Is this the equivalent of the seas receding before a tsunami, or just a webmaster who screwed up? The last time DEBKAfile went on “vacation,” the story broke about the hit on a Hamas big-wig in Dubai.
Still, probably just a webmaster who hit the wrong button. Been there, done that.
——————————————–
Follow me on Twitter and Facebook

Do you find Debka reliable? I used to read them regularly a few years ago, but stopped after it seemed so much was just thinly sourced rumor.

An Israeli friend of mine has a relative in the Intelligence Ministry. He won't tell her what he does or what's going on, obviously. However, she told me: some years ago he was really moody and curt for several weeks, she didn't know if it was something personal or what, turned out a few weeks later came the bombing of the Osirik reactor in iraq.

So, FWIW, she tells me he's moody again. For weeks. As reliable as Debka.