A Bow Seems Defiant Compared To This

A Bow Seems Defiant Compared To This 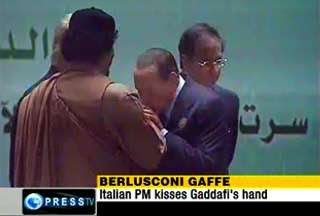 “The fiercely pro-Israeli Italian Premier Silvio Berlusconi was among the guests at the controversy-filled Arab League summit in Libya with the supposed aim of forming a unified strategy against Tel Aviv’s illegal settlement plans in Palestinian territories.

At one point, according to reports, Berlusconi, whose country ruled Libya for over three decades after 1911, stooped to kiss Gaddafi’s hand upon arrival at the summit.”

Via PressTV (Iran) which must have thought this was a good thing (h/t BarcePundit).

Thank goodness we live in a nation led by a President who never would embarrass us this way.

At least the people of Englewood, NJ knew how to greet Gaddafi, and it wasn't with a kiss, as I recall.