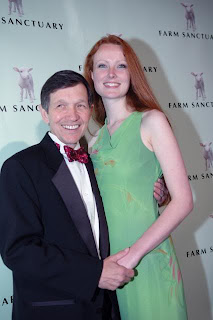 At 10 a.m. this morning Dennis Kucinich (D-OH) has a press conference at which he will announce whether he will vote for or against Obamacare.

Until now, Kucinich has been a principled progressive. You may not agree with his principles, but at least like Jane Hamsher at Firedoglake, he has principles and votes that way.

That contrasts Kucinich with the bulk of the “progressive” wing of the Democratic Party, who have succumbed to power politics. Win one for the Won has replaced any semblance of principle as to the details of health care reform:

[O]n Monday, President Obama paid a personal visit to a senior citizens center in Mr. Kucinich’s district and gave Mr. Kucinich a lift on Air Force One to a health care rally in Strongsville, Ohio.

At the rally, someone in the crowd shouted, “Vote yes!”

Mr. Obama turned and asked Mr. Kucinich if he had heard the shout..

The unprincipled progressives, such as Markos Moulitsas, have threatened Kucinich with retribution by supporting a primary challenger if Kucinich doesn’t support Obamacare.

Of the over 50 progressive Congressmen who pledged not to support any bill without a public option, Kucinich stands almost alone in openly holding to that principle.

Obama, Pelosi and Reid have succeeded in uniting principled conservatives and principled progressives against Obamacare, although for different reasons.

Update: Kucinich stands small, announces he will vote for Obamacare. Kucinich justified his about face on the ground that Obamacare is an incremental step forward. Kucinich explained his prior votes against health care bills as based on principle. Kucinich said the President’s visit to his district was decisive, and underscored “the urgency.”

Kucinich said he is making a decision not on the bill as he would like to see it, but as it is. Kucinich said he does “not detract” from his prior criticisms. The bill is not a step towards anything he has supported in the end. “However, after careful discussions” with Obama and Pelosi, he will vote yes.

Just two days ago Kucinich wrote an op-ed for the Cleveland Plain Dealer in which he excoriated Obamacare:

Unfortunately, the president’s plan, as it currently stands, leaves patients financially vulnerable to insurance companies. It requires all Americans to buy private health insurance policies, while failing to ensure those policies do what they are supposed to do — protect people from financial catastrophe caused by injury or illness….

Unfortunately, if the president’s plan becomes law without substantive change, you would still be only a major illness or injury away from personal bankruptcy, except the federal government will have required you to buy a private health insurance policy….

[T]he version of the bill that reached the House floor was considerably watered down. It had a severely weakened public option and the employee-retirement waiver had been stripped. It no longer constituted an incremental step forward that would provide relief to my constituents, so I could not support it. The version of the bill that passed the Senate was even worse.

Kucinich now will vote for a bill which is worse, in his own words just two days ago, than the House bill he voted against.

Obama has succeeded in destroying the last principled progressive.

In the end, a Democrat is a Democrat, and I will be stunned if he does not vote for Obamacare. That little charade that Obama staged in Ohio probably got to him.

I believe that Mr. Kucinich was snorkled on AirForce-One

What Kos doesn't realize is that the filing deadline for the primary has passed. They can't mount a primary challenge to Kucinich.

By definition Dennis has no principles. Lefties, as much as they hung it on Nixon, believe in the mantra "The ends justify the means". They weren't Mao lovers by accident. He'll vote yes. He always intended to if necessary.

I also try not to get my hopes up too high on public officials.

It will be interesting to see what Kucinich sold out for.

Here's hoping that an extremely large piano — inexplicably being hoisted into a Georgetown Apartment — drops on the little crap gnat while he's on his way to meet his Barbie doll trophy wife for a "taxpayer paid for" celebratory dinner. BTW for him to land a wife like that, he has to certainly be good at something. It sure as heck ain't politics…… or sanity.

Should have known,Air Force One got to him,sold his vote cheap,a crook just like the rest of them.

"By definition Dennis has no principles."

Why would anyone expect him to have principles when he has already long ago announced that he was a Democrat?

As always, in the end, a Democrat is a Democrat. Their only principle is tax and spend.