They Lied! (To Their Own Supporters)

They Lied! (To Their Own Supporters)

Posted by William A. Jacobson Thursday, March 18, 2010 at 01:21pm 5 Comments
More Sharing Options
Firedoglake has a great list (see images below) of Democratic Congressmen who pledged — in writing — not to vote for any health care bill which did not include a public option but who are voting for Obamacare which does not have a public option.

These Congressmen lied to their supporters. Think what they would do to their opponents. 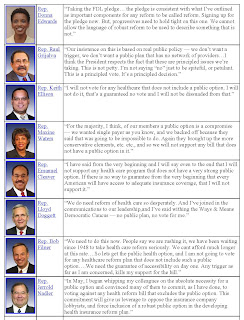 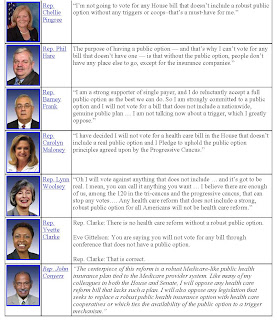 This doesn't surprise me. The end always justifies the means. I am baffled at how clueless all these politicians are and I mean Republicans as well. There are very simple and very obvious ways to control the spiraling health costs.

1. You have to be an American citizen to have access to our hospitals and emergency rooms. I own a small business in Minneapolis and any one who has been to the Hennepin County Medical Center in downtown Minneapolis can tell you very little english is spoken there.

2. Protect the drug companies from lawsuits. Way too often a drug that has been approved by the FDA and has helped thousands of individuals will have an adverse affect on a very small number of people. That is bound to happen in the law of averages when dealing with the human body. Unfortunatly class action lawsuits arise from this and only the John Edwards types of lawyers benefit. It hurts the public and makes the drugs more expensive.
3. allow across border competition for health insurance. Free market competition garuantees the consumer the best product for the best price.
The only thing our government does well is our military. Anything else they touch they ruin and make the costs much hire.
4. Tort reform. Loser pays. If you ever get a chance to watch television during the week it is non stop advertising for lawyers( ambulance chasers) who tell you that the drug companies and insurance companies stink and that they are the only ones with your best interest at heart so call us 7 days a week 24 hours a day.

We have the best health insurance companies, the best drug companies, and the best doctors and nurses in the world. How do I know? Easy. The greatest measure of a country is how many people trying to get in versus how many are trying to get out. The last time I checked our problem eas 11,000,000 plus illegal aliens not states losing their population and work force to other countries

The House voted to approve the Slaughter House Rule. No surprise.

But when I looked over the roll call vote that Michelle Malkin links to, Jason Altmire voted for the Slaughter House Rule. He's the guy that's been on Fox the past couple of days talking about it being wrong.

I guess he's just another lying Demoncrat like the scoundrels FireDogLake has identified.

I am Australian. In the past I have taken the anti-inflammatory drugs. Vioxx did not suit me but not in the way that some have claimed…. I used Celebrex and other drugs of a similar nature. The only thing that happened was an ulcer because I was not cautious – in other words it was my responsibility to follow directions on taking these drugs and ensuring that I had them only with food. I took NSAIDs for more than 20 years.

When I was in the USA, in Washington State overnight, I was shocked to notice an ad by the ambulance chasers looking for people who had taken those same drugs and who had suffered any adverse reaction. They were putting together a class action suit.

It is this kind of irresponsibility that is hurting the USA. All of those class action suits put money in the pockets of the ambulance chasers, and the price of medications goes up. In the meantime, people are not taking responsibility for their own actions.

Basically, if you buy Ibuprofen off the shelves in the supermarket, and you take that drug for headaches and other pain, and you do so without food, then you will suffer an ulcer. It is not the fault of the drug company if you abuse that particular drug.

There needs to be a crackdown on those ambulance chasers and an end to those lawsuits. Let people take responsibility for their own actions when they do not read the directions of any particular drug.

BTW…. this does not apply to anybody who was caught up in something like Thalidomide. Nobody knew at the time that there would be birth defects or that the drug was unsuitable for pregnant women. In the Thalidomide case, any and all lawsuits were acceptable because of the lack of due diligence.

..and YET, Jack4Pack, all your advice fits on ONE PAGE, saving trees and ink on the other…what is by by now…2199 others?

Well guess who else lied about either the bill or their stand on it and the reason – the Prez of course.

See my post "Obama lied: you may not be able to keep the health care insurance you need."