The housing bubble peaked in 2005. The bubble reflected a fiscal lack of reality built upon the greater fool theory, that there always would be another buyer foolish enough to pay more. 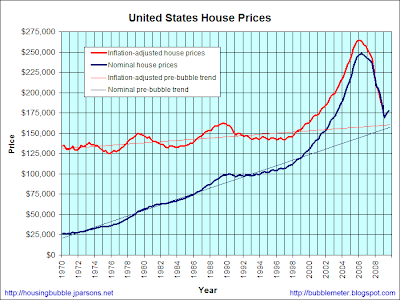 (Chart via Bubblemeter)
We now are on the cusp of passing a health care bill built upon a similar irrational foundation.
The Democrats presume that there always will be taxpayers and purchasers of U.S. Treasury securities foolish enough to fund the trillions of dollars in spending.

Been there, done that.

A thought on this portentous Sunday:

"The fear of man brings a snare, but he who trusts in the LORD will be exalted." –Proverbs 29:25.

Whether the Sabbath is Saturday or Sunday, the relentless move toward this cliff has been Obama-made. The savior is being crowned on one of holy calendar days.

Just today the Chinese have issued a warning that they will take firm action should we move forward and demand that they stop manipulating their own currency. They see it as meddling in their internal affairs.

Earlier in the year China expressed its concern about the expenditures of this Administration.

Barack Obama does not listen to anyone.He will drag this country to the brink of war in the Middle East to make a point. And when that happens, there will be no money to fund it.

I have appreciated the kinds of questions asked here this week. They have been wonderful and have helped release the frustration I and others are feeling at this sad turn in our nation's history.

I feel increasingly that we will be living in kind of communist China. Professor, be prepared with other intellectuals along with artists to be sent to the country to plant and harvest crops. I am certain that in the class warfare that Obama practices that anyone with talent or a good education will be seen at too "rich."

I just sold some few items from China my grandmother had. The Chinese are buying them back from us.The most highly prized objects are those made before 1900 – at most not after 1920. All fine objects are advertised that way. Why is this? During the revolution, artists and intellectuals were sent to do manual labor in the country. The arts suffered. The carving and other of their applied arts may never come back.

There is nothing new under the sun. The light from this savior has thrown the bleak future for this country into relief. I hope I have misread the shadows on the cave wall.

Our politians have seen something special which few Americans have seen, and it changes their view of the world. They have seen where money comes from, and it blows their minds.

Bernanke: You have problems? I've got money to give you. And, it is no problem for me, we print the money in the back.

Obama: You have problems? I've got promises for you. We're going to fix things for you, however long it takes. Thank Gaia that I'm here now to think of a good solution. And, it is no problem for me, we print the promises in the back. I'll give you a note to see Bernanke.

A quote from the movie "Gladiator": "I think he [Commodus / Obama] knows what Rome is. Rome is the mob. Conjure magic for them, and they'll be distracted. Take away their freedom, and still they'll roar. The beating heart of Rome is not the marble of the Senate. It's the sand of the Colosseum. He'll bring them death and they will love him for it."

I believe the only fools the Democrats are concerned with is the voters. I doubt Congressional Democrats actually considered the implications of the actual spending.