The Baltic Sea in northern Europe is suffering its worst ice in over 15 years, trapping over 1000 people aboard two passenger ships and other vessels: 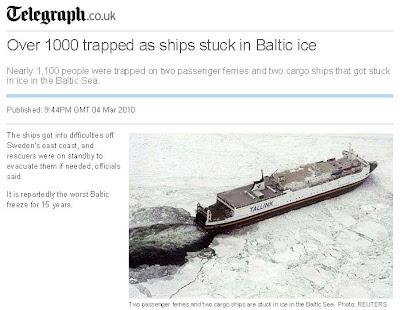 We have frequent "Global Warming Updates" on Common Cents…

Yet another example of how, following the climategate e-mail revelations back in the fall, and the investigations that have being launched into the possible corruption of the academic atmosphere at the Climate Research Unit (CRU) at the University of East Anglia, the American media has kept its silence.

Mums the word from our media!

Inquiries across the pond in the UK now include submissions to Parliament of high level professional scientific organizations, such as the 36,000 member "Institute of Physics," which strongly suggested possible corruption of the scientific method itself in the manner in which climate research has been pursued within the CRU at East Anglia.

Developments in that story are being covered daily by the British press, and somewhat across the board. Even the BBC has taken this breaking story and run with it.

But the mainstream media here, with the occasional exception of Fox News Channel and one or two segments on CNN, has by and large ignored this issue.

Yes, a few stories or editorials have appeared here and there. But the big three major networks in particular have refused to cover the various aspects of this huge story. They have instead continued to tow the AGW and climate change line, doggedly and firmly wedded it seems to what increasingly appears to be a Swiss cheese narrative.

Al Gore publishes an OpEd piece in the New York Times risibly claiming that the mere "discovery of at least two mistakes" has not in any way undermined the basis of the climate change hysteria he has fostered! Seems to me like mighty big fleet of trucks could be parked in that little tiny phrase "at least"! Even since his piece was published, more errors have piled, up as has been noted in the British press.

None of our media, it seems, will closely examine Penn State’s Michael Mann and his hockey stick, regardless of the serious questions that have been raised. Even Phil Jones at East Anglia gave the BBC an interview recently and conceded that the warmists may well have the Medieval Warm Period (MWP) wrong, and and Jones even admitted therein that he himself was a sloppy record-keeper!

The question about the MWP is absolutely central to the basis for the Mann "hockey stick," and for that matter, it is an essential element of the theory underlying the remaining graph trend, especially as relate to the periods of the Maunder and Dalton Minimums, as well as certain periods of the 20th century.

The fundamental possibility that, as Jones conceded, there may well have been an extended historical period within the past thousand years, one that had a warmer climate than the one we had been experiencing for a time up into the late 1990s, casts everything that has happened since the MWP into a different light.

Everyone – the warmists included — recognize that that earlier warm period could not possibly been a result of human caused factors. That’s because the hearty folks who named Greenland "Greenland" (as opposed, say, to "Big Ice Cap") used oars and sails to get there, not internal combustion engines.