Here is how Tucker Carlson described the purpose behind the Daily Caller (emphasis mine):

Tucker Carlson announced plans to launch DailyCaller.com, a conservative-leaning news site that will aim to be an answer to the Huffington Post….

Mr. Carlson told reporters and bloggers at the Heritage Foundation in Washington, D.C., that the site would focus on coverage of President Barack Obama’s administration. “There just aren’t enough people covering this administration and telling the people what’s going on,” he said.

The site will take on the form of a general interest newspaper, he said, and will even attempt to be faster than the popular and speedy Drudge Report. Mr. Carlson also said that DailyCaller would not be a place to discuss the future of the Republican Party. “I’m interested in that conversation, but it will not take place in our site,” he told reporters.

Yet the only story of “substance” broken so far by the Daily Caller was the expense of $2000 by the RNC at a strip club, for which a staffer has been fired.

While this may be a legitimate news issue, it hardly fits the Daily Caller’s mission statement, to balance out the lack of journalistic examination of the Obama administration.

The mainstream media and left-wing blogosphere (including Huffington Post) are all over every move the RNC and Republicans make, while ignoring and covering up any and all possible problems in Democrat land.

Daily Caller may have earned a news cycle by piling on, but it hasn’t earned any respect. From anyone.

Update: Here’s what a hard-hitting conservative counterweight to HuffPo looks like: 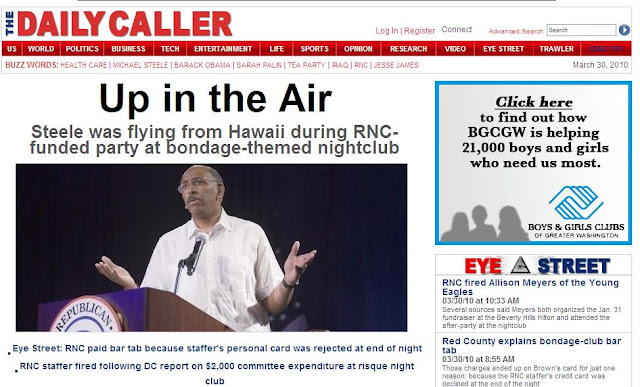 Update 7-20-2010: The Daily Caller has proven its worth, Yes, Liberal Journalists Did Manipulate The 2008 Election.

——————————————–
Related Posts:
Sorry, I Must Stop Posting About Obama
Bloggers In Pajamas Scooped Again By Big Media
NY Times Finds Something “Buried” So “Deep” I Posted About It Months Ago

This is the first mention I've heard of that project in months (I don't think Tucker is doing a good job selling it).

I'm not a fan of the web site as it seems too cluttered, the result of trying to have too much content on one page. As for Mr. Jacobson's assertion that Tucker has strayed from his business plan by reporting on the trivial strip club story, I think that Carlson had a purpose in doing so. He was simply trying to clarify that Michael Steele was not part of this story, as initially suggested in some other lefty web sites. Again, I'm not a fan of the site, but I think the criticism here is unwarranted.

It's very snobby, "Beltway forever," and is noticeably center left. Not by a large number of degrees, but noticeably.

But dude, it's Tucker Carlson. He's made a career of being the frat boy liberals have in mind when they talk about Conservatives.

I would say, to Mr. Carlson:

The mission statement is still good.

If you've managed to screw up here, that ain't the end of the world. Learn from it, move on, and FULFILL THAT MISSION STATEMENT.

While we needed to know that Steele is incompetent and possibly corrupt, you have to wonder who fed them this story.

Was it low-hanging fruit, or another Axelrod manipulation?

The writing is generally weak on this website, which to my thinking closely parallels the thinking of Tucker Carlson.

For the far right, if you're not preaching to the choir it's just liberal bias.

I don't know. I've seen some good stuff over there, even apart from Treacher and Labash.

The site gives the latest on Kate Gosselin. How can you beat that?

It's got a great formula and content platform, but it hasn't delivered the goods as yet. It could probably use a small army of aggressive investigative journalists.

davemartin7777 get that noise outta here. There are none so blind as those who will not see.
According to scholar Richard Alan Nelson's (2003) study Tracking Propaganda to the Source: Tools for Analyzing Media Bias, media effects findings suggest that when bias occurs it stems from a combination of ten factors:

1.The media are neither objective nor completely honest in their portrayal of important issues.

2.Framing devices are employed in stories by featuring some angles and downplaying others.

3.The news is a product not only of deliberate
manipulation, but of the ideological and economic conditions under which the media operate.

4.While appearing independent, the news media are institutions that are controlled or heavily influenced by government and business interests experienced with manufacturing of consent/consensus.

5.Reporters’ sources frequently dominate the flow of information as a way of furthering their own overt and hidden agendas. In particular, the heavy reliance on political officials and other-government related experts occurs through a preferential sourcing selection process which excludes dissident voices.

6.Journalists widely accept the faulty premise that the government's collective intentions are benevolent, despite occasional mistakes.

7.The regular use of the word “we” by journalists in referring to their government’s actions implies nationalistic complicity with those policies.

8.There is an absence of historical context and contemporary comparisons in reportage which would make news more meaningful.

9.The failure to provide follow up assessment is further evidence of a pack journalism mentality that at the conclusion of a “feeding frenzy” wants to move on to other stories.

10.Citizens must avoid self-censorship by reading divergent sources and maintaining a critical perspective on the media in order to make informed choices and participate effectively in the public policy process.

check it out folks, compare my site with me and a few friends to daily caller. who's doing a better job keeping the establishment media and obama honest?

"But dude, it's Tucker Carlson. He's made a career of being the frat boy liberals have in mind when they talk about Conservatives."

Bingo. nothing more need ever by said or written.

I say give it a little time. It can still meet its objective.

I think the site is excellent.

You name a single darn story to say the whole effort, still pretty new, is a failure?

Steele's spending is absolutely newsworthy. The story wasn't about the Voyeur club, but the rank fiscal insanity that is leading the RNC to have a serious problem funding so many races in 2010. It's important.

No, it's not scrutinizing Obama. But if you read the mission more carefully, you see that Tucker didn't say that was the *exclusive* point of his site. This is news. And by being a fair dealer of information (And in this case, the RNC is being awful and the Daily Caller being pretty fair), the Daily Caller is building steam. They can continue to scrutinize the Obama administration with more readership from a broader swath.

This isn't Red State. And BTW, they are doing a pretty good job discussing Obama related news, too. You neglected that point, I guess because it kinda ruins your argument?

So far, The Daily Caller is a major suckfest. Over 20 people on the payroll, and the major feature on the site is the borderline plagiarism pioneered by The Huffington Post; headline another outlet's news article, copy the first few paragraphs, include a link at the bottom to the source, and contribute absolutely nothing original.

It's first major original story is the saga of some poor sap who got caught with the bill when some RNCers went to a sexually-themed strip club (horrors!), and then sought RNC reimbursement. The article was written dishonesty, to strongly imply that Steele went to the club, along with other personal expenses falsely attributed to Steele himself. When called out on the dishonesty, Tucker Carlson tried to lie his way out of it, denying all error. And now most comments on his own site on this matter express frustration with Tucker's lack of candor.

When you damage your reputation for honesty at the outset, it's hard to recover.

"While we needed to know that Steele is incompetent and possibly corrupt . . . "

At a club party where Steele wasn't, and about which he knew nothing, a non-employed consultant "staffer" took unnamed BigBux donors out for a fling, and then turned in an expense report for it and was repaid the money, and thus Steele is incompetent and corrupt?

You're a Truther, aren't you?

It seems to me Breitbart's sites and Newsbusters (among others) are fulfilling The D.C.'s mission statement decently. It's still shocking that Breitbart is the genius behind HuffnPuff. We need more from the right, but I question the ability of anyone inside the beltway like Carlson to tell it like it is. He's never had much of substance to offer; "frat boy" is the perfect description. The site needs gravitas.

And how long has DC been around? A few months? Seems to me Huffery was nothing for at least a year. I like DC and wouldn't miss it.

Agree with syd B. – it's way too cluttered – By my count they currently have 112 headlines/teasers on the front page. That's ridiculous. People don't have time for that, especially when it's all jammed together without clear categories. You've got Kate Gosselin (who cares) next to foreign policy. Breitbart's Big ____ are already doing this better.

DC is probably thanking this blog and others for the Rule 4 skirmish (see http://rsmccain.blogspot.com/2009/02/how-to-get-million-hits-on-your-blog-in.html)
According to Tucker: "The Daily Caller requested interviews with Michael Steele on Jan. 14, Jan. 15, Jan. 18, Feb. 10, Feb. 23 and again on March 23. All were denied." I think Tucker gets high marks for making a splash and now being noticed (i.e.legitimated) by the dominant lefty press. Maybe prominent figures will think twice about blowing off DC interview requests. But Prof. Jacobson's point remains, when will Tucker prove he has the cojones to go after the left like a Breitbart mad dog?

For what it is worth (and perhaps not much), I am a regular reader of the Daily Caller and of this blog.

I don't get why the DC is somehow not a success.

There are plenty of contradictions that retail politicians serve up. These are people who continually ask not only for donations but more power over our lives. GOP and Democrats.

And another thing – Carlson is really more a libertarian than a "conservative" which makes the site all the more interesting, IMO.

Daily Caller did one thing I thought nobody could do.

They got me to stop reading Jim Treacher, because their site sucks so bad.

Sorry to hear that, Sigivald, but all the best to you and yours.

Sorry guys/gals but Tucker & Daily Caller seem to be doing quite a good job. Just ask WaPo's Kurtz. BTW, how does it feel to be as stupid & incompetent as Howie Kurtz?
http://www.washingtonpost.com/wp-dyn/content/article/2010/04/02/AR2010040200952_4.html?hpid=topnews⊂=AR

BTW, Daily Callers "DC Morning" is a must read with Jim Geraghty's "Morning Jolt" from NRO.