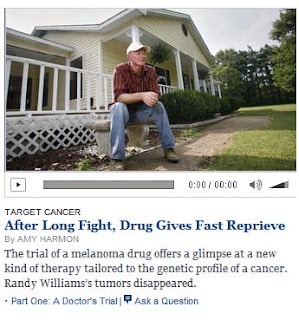 The pharmaceutical industry is under attack by the Obama administration and Democrats for supposedly obscene profits.

Despite the industry’s support for Democratic health care efforts, reached last spring in exchange for certain protections, Obama continues to demonize the industry. Obama’s new plan, rolled out yesterday, increased taxes on the pharmaceutical industry by $10 billion to pay for expanded insurance coverage.

Which brings me to the article featured on the home page of the NY Times today about a breakthrough drug, PLX4032, which is showing very promising signs as a cure for melanoma:

For the melanoma patients who signed on to try a drug known as PLX4032, the clinical trial was a last resort. Their bodies were riddled with tumors, leaving them almost certainly just months to live.

But a few weeks after taking their first dose, nearly all of them began to recover.

The article is the second in a three part series. The first part ran Sunday.

The series documents the heartwarming stories of lives saved, and the doctors involved in the clinical trials.

But there is only passing reference in the series to the history of the PLX4032, and the role played by pharmaceutical companies (emphasis mine):

The drug Plexxikon called PLX4032 was different, designed to bind to the B-RAF protein only in cancer cells. Human tumors with the mutation, grafted into mice, Plexxikon’s chief scientist told Dr. Flaherty, had stopped growing when exposed to the drug. And no amount seemed to induce side effects in dogs or monkeys. An investment in the drug by Roche, the Swiss pharmaceutical giant, shortly after Dr. Flaherty signed on to lead its first human trial alleviated his concern that Plexxikon might not have the wherewithal to pull it off.

The company behind PLX4032 is Plexxikon, founded by two academic researchers in 2001. PLX4032 has been under development since that time, but would not have become a viable drug without significant investment by the Roche, one of the largest drug companies, which agreed in 2006 to invest up to $700 million, depending upon whether the drug hit certain development benchmarks.

If PLX4032 is successful, and survives the FDA approval process, Roche stands to make billions; and thousands if not millions of lives will be saved. It the drug turns out not to be commercially viable, Roche loses its investment.

What is missing from this picture is government. PLX4032 was not developed by a bureaucrat, but by entrepreneurs with the help of private equity investments. While government surely plays a role in basic research funding, and supervision of clinical trials, without the entrepreneurial spirit and the funding of a large drug company, PLX4032 would be just another good idea sitting on a scientist’s shelf.

And that is the point of this story. While it is easy to demonize the profits of the pharmaceutical industry, the reality is that lives depend upon the ability of the industry to fund research and development of new cures at risk of losing that investment. While these cures are expensive, the surgeries and other medical care avoided often are just as expensive, not to mention the human suffering avoided.

I hope that PLX4032 turns out to be all that the NY Times article seems to indicate. And that the people who invested their lives and money in bringing it to market make a fortune.

Not because I want others to be rich, but because I want the Plexxikons and Roches of the world to keep on trying to develop cures even if it means they lose out on most of the drugs they develop.

If Obamacare passes, there will be higher taxes on drug companies; and if Democrats in Congress get their way, we also will be demanding quicker generic equivalents and drug re-importation, which makes the economics of drug development less viable.

We’ll never know which miracle cures never came to market because of the Democratic demonization of the pharmaceutical industry. And what we don’t know, may kill us.

I'm also curious – this week's version of ObamaCare seems to slap on billion$ in taxes and fees to pay for a public option that it doesn't provide.

Does anybody outside of government benefit from the proposal?

You make a good point, but it seems to assume that Obamacare is actually going forward. I don't see much prospect for that. I think Obama's strategy at this point is simply to salvage something on the political front for what is already a hopeless defeat on the substance.

He's hoping (a) to stem the loss of lefty support by now appearing to be fighting for HCR (in contrast to the largely hands-off approach he assumed while the battle was actually being waged in Congress); (b) and create the illusion in the eyes of some fraction of the electorate that the defeat of HCR was actually due to GOP obstructionism rather than the inability of DEMOCRATS to rally around a single HCR package.

Obviously, even if he succeeds in accomplishing "a" and "b," these things barely mitigate the huge blow he has suffered from the loss of the HCR debate itself. In fact, the whole HCR has episode has blown up disasterously for both The One and his fellow Dems. Not only has the reform effort simply failed, it has actually spurred on a massive populist revolt, which is still taking place, against the entire Big Government philosophy that the Democrats represent. It has totally backfired on them.

I think Americans have become sophisticated enough to realize that something as a difficult and complicated as making health care affordable for everyone isn't going to come about simply because charlatans like Barack Obama, Nancy Pelosi, and Harry Reid say, "Trust us; we'll make this happen, and it won't cost you a thing." People aren't falling for that, and they're not falling for the obvious demagoguing aganst the insurance and pharmaceutical industries that usually goes along with it.

Having worked in the pharmaceutical industry, this is a very real picture of costs for developing drugs in this area – biologics. They are ten times or more costly to produce than some of our traditional molecular drugs (I hope I have remembered my medical terminology correctly – I worked in IT). My younger brother was diagnosed with stage iv lymphoma two years ago. He is alive and in remission because of this kind of out of the box drug development.

Now try telling people why we can't just import drugs from other countries willy nilly "hey, it's the same drug" they exclaim. I spent hours explaining the why of that.

It is a complicated picture and of course the government paints the picture in broad brush strokes.

The bottom line here is that the pharmaceutical industry is one of our last home-grown "industries." China has jumped into pharma industry big time. Their drugs have had quality control and, worse, ingredient problems but they will work that out. However, I hope we learned during the H1N1 scare when we had to import vaccines – we should not depend on foreign nations for these kinds of products.
AND – the US has all but gone out of the vaccine business due to the difficulty in making the product and the law suits that result. TORT REFORM! Where are you!

Medicines that are "staple" drugs help to fund this type of vital R&D;, allowing many to benefit immeasurably. I would like to pay less for medicines, but am glad to fund such cures – and the striving to find new ones.

Thanks, again! Another great post on healthcare. Please keep it up!

OT – did you know you and your blog were "on" the Mark Levin radio show tonight ("Obama's Plan in Two Words")? Kudos!! He said that he was putting a link to your blog on his web site….. May it bring you many new readers!

If it is a copy of the Senate bill then Obama's bill will also require insurer to pay "medical expenses" for Christian Science prayer treatments, those holistic treatment centers and other various practitioners who don't even have to see their patients. Yup just call up your holistic healer & they can bill your insurance. What could go wrong?

So which "miracle cure" lobby is running things again?