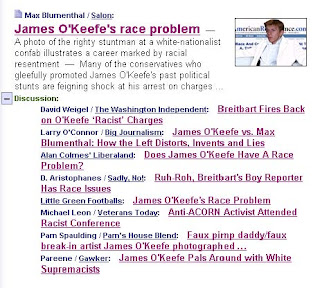 This is the latest in the Saturday Night Card Game series on the use of the race card for political gain:

Max Blumenthal at Salon.com declared James O’Keefe to have a “race problem,” which are just code words for being a racist.

Blumenthal’s story was based on allegations which appeared in a blog almost no one had heard of before.

The gist of Blumenthal’s story was a now familiar allegation of someone, in this case O’Keefe, attending a supposed “white supremacist” conference.

Taking it one step further, Blumenthal alleged that O’Keefe manned a table full of racist literature, and used a photo which purported to show O’Keefe doing such.

Since this story fit right into the favorite narrative used to attack conservatives, numerous blogs jumped on the bandwagon. (Memorandum thread in image is here.)

The story turned out not to be true, and the photo was a PhotoShop version in which O’Keefe’s head shot was pasted onto another person’s body. I’ll leave the full take down to Big Journalism, which has refuted the story and now is demanding retractions from those who jumped on the bandwagon: 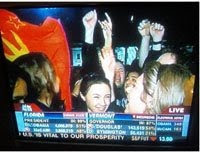 We see this in the attacks on tea party participants. One tactic is to take a poster carried by one out of thousands of attendees and then attribute the sentiments of that person to everyone in attendence. Another variation is to take a position, such as being against illegal immigration, mischaracterize it as xenophobia or racism, and then to smear everyone in attendance as racist.

The tactic, if used against Obama supporters, would take the carrying of a Soviet flag at an Obama victory rally (see photo) and use that photo to claim that every person at the rally was a communist.

I am glad that Big Journalism has the wherewithal to take on these smears. Unfortunately, most people do not have those resources, and the smears stick.

Max Blumenthal is a race baiting hack. He attacked Toby Keith back in August of '08, for being "pro-lynching" in his song "Beer for my horses", and then proceeded to equate Keith's song with its call for rough justice for evil doers with the unjust lynching of blacks under Jim Crow.

If you go there, be warned! Blumenthal is also a serial hotlinker, and the picture of blacks being lynched that Max originally posted has been replaced on the site he hotlinked it from with a picture of a clown telling Max to "F" off!

My indignation at Max Blumenthal's hackery in a little greater detail here:

To paraphrase an vengeful Spaniard, I don't think that flag means what they think it means.