Reports are that Patrick Kennedy (D-RI) will not be running for reelection.

Everyone is wondering why. If I weren’t such a humble person, I might suggest the following: 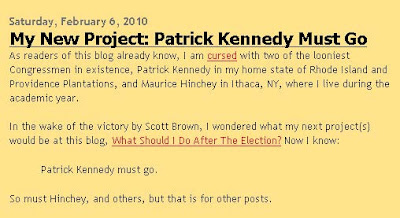 Now what do I do?

Update: Upside of Patrick leaving so soon, I got an Instalanche out of it. Downside, think how many more there would have been had he stayed.

Via Politico, here’s his announcement:

Smart candidates will be beating down your door with helpful suggestions. (My opponent is… and this is why he/she needs to go).

In my neck of the woods Gerry Connolly should be pretty easy, maybe not worthy of your talents. Jim Moran would be a suitable prize for your new stature. Nation wide Russell looks promising in taking Murtha's old seat. Rubio and West are obvious topics as well.
Congrats With great power comes great responsibility as well.
Gene

Might I suggest my current attorney general who would like to become my next Junior Senator. The ever cautious Richard Blumenthal. Keep up the good work!

High five, Professor! Job well done. H/T to the boyz at HillBuzz for sending me here, reminding me of your power. I hope you heard Medina's "Truther" meltdown on Beck today. She is toast.

Almost forgot I've read "on teh internets" that Barny Frank could be a realistic target as well. Wishful thinking? Is there a real opponent?
Gene

I was thinking the same thing myself

I've got to watch you more closely. Your clearly much more than a Professor. 😉

write the name of the 14(?) D-Senators up for reelection in 2010 and the 254 D-Reps on little pieces of paper. Put them in a hat and pull one at random. Write a nice post about the lucky politician. Then wait for them to announce that they want to spend more time with their families. Proceed to the next random selection. You can pull 2 or 3 a day if time is tight.

Hello, this is awesome news! The Dems are dropping like flies and that's only a good thing. I linked you at my Blog if you didn't know.

OK so moving right along, who have the Dems got to put in the slot?

I sense that after his Dad's seat was lost, the pressure on him was too great. He saw the opposition regrouping to get him.He has been very ill with addiction and IMO he emotionally just is not up to the task. It looks as if he will devote his next years to medical issues from which he and his mother have suffered. It sounds as if it is a deeply personal as well as political decision. I wouldn't wish alcoholism on my worst enemy.

You can come out to California! I'd gladly share Nancy Pelosi and Babs Boxer with you!

Wow! Fast work! Hearty applause from here. We had no doubt you could do it.

Suggestions? Ahem. And I quote. . . "Patrick Kennedy must go. So must Hinchey, and others."

From the standpoint of benefit to the nation, Barney Frank is an outstanding nominee for the coveted title of next politician on the list to go.

But you know what they say in Ithaca, "Think Globally, Act Locally." 😉

How about helping to get rid of the Big Kahuna in the House?

Help him…… and you help us all!

Holy cow, that was fast.

Please allow me to be the first Clinton Dem to thank you for your aid in this matter.

The Kennedy name is now officially MUD. Not only do the Republicans hate them, but so does the Clinton wing of the Democrats. (Thanks to Uncle Teddy, who pushed The Holy One to the head of the class, against the will of his own constituents.)

When roughly 75% of the population can't stand the sound of your name… that ain't good. Especially if you are in politics.

Proof positive that Legal Insurrection DOES have magical powers, which is why I read it every day. Have you considered posting odds on March Madness?

Jeebus! When you put the Hoodoo on someone, it really works! Remind me not to piss you off…

Good Job!!! I recommend Heath Shular from North Carolina as a prospect.

I'll honor you by naming our family's next pet Leg-Ins if you work your magic on Queen Nancy.

Prof, word is either Patrick Lynch or Bill Lynch may run for that 1st District seat. Patrick Lynch's early polling numbers aren't good in the gubernatorial race, so he'd lose nothing by pulling out of that race. Either Lynch could be tough competition for Loughlin considering their strong political connections in the 1st District. Things are about to get interesting.

I'll chime in on Pelosi, and submit a request for Boxer's next Senate run and Feinstein's ambition to become Governor of CA.

I suspect that getting the MSM to admit that AGW is unproven at best might be beyond even your powers. 😉

You get full credit! If not Hinchey or Frank, how about Gary Ackerman? Has got a stock scandal to his name.

Wow! Just Wow! The great, the powerful, Professor Jacobson! I am impressed! That didn't take long at all and congratulations, job well done!

Congrats Professor. I for one am sure that you scared the hell out of Patrick.

So who is your next target? You named Maurice Hinchay as your second favorite — a good choice because despite a redistricting to favor him with some solid Dem areas, the guy is off the charts on the lefty end — considerably more so than his constituency even before the Brown phenomenon. He has not faced a really tough challenger for years (not since the early 90s, I think). He's highly vulnerable.

But my favorite target would be Bill Delahunt in Mass whose district went for Brown and who has many of the same conlficts with his constituents as Hinchey. The added power of casting the race as "Brown II" would be a boost and tend to attract more media attention and online money.

Of course, in my own suburban NY neck of the woods, I'm keen on seeing Jon Hall (northern Westchester) who lucked out in the 2006 anti-war wave bite the dust.

But consider Delahunt. Maybe you can do both Delahunt and Hinchey? I'd support both efforts.

And each day thereafter you can cross names off, as they each begin dropping like flies!

OK, you really are good. Feinstein decided not to run for Governor of California. Now what can we do about Boxer? (heheheh)