Does This Mean My House Never Will Be Waterfront?

Does This Mean My House Never Will Be Waterfront? 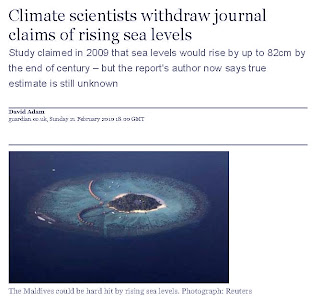 I really didn’t care when they revoked the claim that the glaciers would disappear. I don’t live near glaciers.

But now the seas are not going to rise? My dream of a waterfront home is melting away faster than the glaciers:

Scientists have been forced to withdraw a study on projected sea level rise due to global warming after finding mistakes that undermined the findings.The study, published in 2009 in Nature Geoscience, one of the top journals in its field, confirmed the conclusions of the 2007 report from the Intergovernmental Panel on Climate Change (IPCC). It used data over the last 22,000 years to predict that sea level would rise by between 7cm and 82cm by the end of the century….

The paper – entitled “Constraints on future sea-level rise from past sea-level change” – used fossil coral data and temperature records derived from ice-core measurements to reconstruct how sea level has fluctuated with temperature since the peak of the last ice age, and to project how it would rise with warming over the next few decades.

In a statement the authors of the paper said: “Since publication of our paper we have become aware of two mistakes which impact the detailed estimation of future sea level rise. This means that we can no longer draw firm conclusions regarding 21st century sea level rise from this study without further work.

Question: Can "scientists" accurately correlate a tree ring measurement in, say, millimeters with a temperature of hundredths, or even tenths, of a degree Centigrade?
Answer: Absolutely not.

Question: Can they precisely differentiate the portion of tree ring width resulting from more rain versus warmer temperatures?
Answer: Hell no.

My suspicion is that it revolves around the ice caps. Most of them are floating in the water. ice takes up 14% more space then the equivalent liquid water, however when ice floats 90% is submerged and increases water volume, while ten % is above water affecting air volume.

When it becomes totally liquid the over all mass of the entire liquid water rejoins the ocean resulting in a net LOSS of 4% volume. Ocean levels would fall not rise.

unless all the glacial melting and mountain ice caps offset this 4% by 4% or more the ocean level would drop in the event of melted ice caps.

See? That's why we can't have an intelligent discussion. It's always about facts and logic with you guys. AGW studies may be fake but they are accurate! The debate among political scientists (you know, your classmates in college who didn't know what they wanted to do when they grow up) has been over for years already!

Troubling lack of reading comprehension for a law professor. The retraction was of an estimated *limit* to sea level rise.

The retraction was actually caused by… climate scientists who showed that this estimate was almost certainly too low. They're the same scientists mentioned in the article.

The retraction of the article is in reality a further sign that the IPCC estimates mentioned in the article are far too low. This is in keeping with satellite data showing that rising sea levels have consistently been at the upper bounds of IPCC projections.

Don't worry, it looks like you'll still get your waterfront property (at least for a while…). The title of the paper should have warned you – "Constraints of future sea level rise…" – Other scientists have succeeded in persuading them that their 82cm by 2100 constraint is almost certainly wrong and a better prediction is about double that.

How far above sea level did you say your property was?

Hey, that screws up the EPA's new department which was designed to centralize information about global warming. For example, (as one silly supporter said) "if a developer is thinking about building a development on the shoreline, it would be good for him to know that it will be underwater in twenty years." (I kid you not. It would be funny if they weren't in charge.)

Now they won't need that department. Nothing is going to happen except Goldman and Sachs won't make money in the carbon credit market and neither will Al Gore.