Anti-Palin Faux-troversy of the Day: The Black Bracelet

Anti-Palin Faux-troversy of the Day: The Black Bracelet 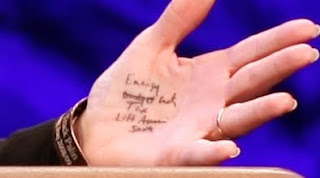 I thank Yale Graduate School student Eric Robinson for his service to the country in Iraq and Afghanistan.

But Robinson’s hit piece on Sarah Palin, Palin’s bigger blunder, leads me to believe Robinson has succumbed to the New Haven funny water, either that, or he is spending too much time with Bruce Ackerman over at the law school.

Robinson writes that Palin has shown contempt for the memory of fallen soldiers by wearing a black metal bracelet (see photo) with the name of her son living son Track on it:

The name on her black memorial bracelet — one, like the gold star, a demonstration of a friend or associate who was killed in action — is that of her oldest son, Track. Track served honorably in Iraq, and both he and his parents should be thanked for his selfless service to his country. He is also alive.

Commemorating Track’s service by wearing a a black memorial bracelet which is reserved for those dead or even a red bracelet for those missing in action, demonstrates a horrifying contempt for those who gave their last full measure of devotion or an almost unbelievable ignorance of the importance of symbols in American history.

Unfortunately, given Palin’s reputation and frequent public statements, I assume it is the latter.

Needless to say, this gotcha is making Robinson something of a hero. Political Carnival proclaims: “Not only did she mega-embarrass herself again, she did it tastelessly… Barbie wears live people. And the humiliation continues….” Taegen Goddard’s Political Wire has picked up the story, as has James Joyner (neither one expressed a view on the propriety of wearing the product).

It may be that wearing a black wrist band with a fallen soldier’s name on it is a common method of honoring that soldier, but a simple internet search demonstrates that that is not the exclusive use of black wrist bands.

The Trophy House sells a black metal bracelet which it calls the Soldiers’ Deployment Bracelet:

Let the world know that your loved one is serving abroad in the United States Armed Forces.

These bracelets are currently available in two styles. We have the silver bracelet, made of highly durable .05 gauge scratch-resistant stainless steel. And the black bracelet made of black aluminum.

The engraving on the bracelet includes the soldier’s name, the unit served in, and the date of their deployment. These bracelets are guaranteed not to fade. Wear it with pride while your loved one defends our liberties and freedom!

Palin’s wearing a black metal bracelet with her son’s name on it would seem to be consistent with honoring his deployment.

To make the leap from Palin wearing a commonly available deployment bracelet to Palin having contempt for fallen soldiers is both a bridge too far and a bridge to nowhere.

Just because an item is used for one purpose, doesn’t mean that such use is exclusive to that purpose. I hope they teach such concepts at Yale, because you will need them when you enter the real world, and even more so when you enter politics.

Update: It’s full out nutroots frenzy on this one –

Update No. 2: It gets better. The company which manufactured the bracelet Palin wears has bragged about it on its website, and guess what, they made one for Joe Biden too (to honor his son’s service) and Biden’s office called the company to thank it:

Back in 2004, we had heard that both Sarah Palin’s son and now Vice President Joseph Biden’s son were heading off on deployements, so we made them both a set of Deployed HeroBracelets with their son’s names on the bracelets. Our way for thanking them both for having son’s in the military. We actually got a very nice call from Senator Biden’s office, thanking us for the HeroBracelets. And now we’re quite proud to see Sarah Palin wearing her HeroBracelet.

So Joe must hate fallen soldiers too!

The mainstream media and nutroots accuse us of having black helicopters, but the Palin haters now have black bracelets.

More on this story at Black Bracelet Author Needs A Mirror

——————————————–
Related Posts:
Palin Causes Left and Right To Lose Reading Ability
Palin Exposes Misogyny In The Democratic Base, Again
I’ll Have Some Palin Derangement Syndrome with my Turkey, Please

Mr. Jacobson, thank you for the internet search and accompanying commentary regarding Robinson's gaffe. As a Yale alum and still occasional reader of the Yale Daily News, I am never surprised to see these types of editorials there.

Though the comments section isn't often the best forum for rebuttals, you might check out comment #5 on the link you provided to the article. It purports to be from a representative of the company that crafted Ms. Palin's bracelet, and offers an explanation which is similar to yours.

Wow, that set me off. Linked you here, sir.

Wow. Just….wow. How low will they go? How long did it take to google that site? Say….20 seconds? Simply mind-boggling; epic fail!

Is this somehow indicative of the product of Yale graduates? But, wait! He hasn't graduated yet. Perhaps yet another instance of indoctrination? He couldn't have gotten this from his military training….. He needs to be educated, indeed.

My cousin wears one of these. For her son in the Navy.

Robinson has lost his mind. And if he thinks that the families of soldiers, dead or alive, are gonna buy his BS… he is even further gone than you indicate.

These people are really only damaging themselves with these baseless accusations where they stretch the truth well past it's breaking point. The more of these things are proven false, the less people will trust anything they say in the future.

I just read this: comment # 5 on the Yale site linked in your blog entry:

We sent her those bracelets during the last election. When we learned that her son, Track and Senator Biden's son were both being deployed overseas, we sent them both Deployed HeroBracelets with their son's names.

We've been providing Deployed HeroBracelets since 2004 for families to wear while their loved ones were serving. They can be made from sterling, copper, leather or bronze colored anodized aluminum (black is reserved for KIA).

About half the bracelet we make are Deployed. Typically they will have the soldier or Marines rank, name, country of deployment and timeframe of deployment (2004/2005).

So she isn't out of line for wearing the Deployed HeroBracelet. There are ten's of thousands of families around the country wearing them right now. On the HeroBracelets web site, we've got hundreds of letters from families, many vowing to not take the bracelet off till their loved one comes home.

It seems that Joe Biden is wearing (or at least has) a similar braclet. Does this smear apply to him, too? Nah.

Misogynistic, hateful Lefties – the "party of no tolerance" targeting anyone with whom they disagree. PDS is alive and well at Yale.

The sudden, and completely unbelievable, interest of outfits like Crooks and Liars and DailyKos in "the norms of military families" is what's really obscene.

The people Crooks and Liars have retracted their story. Seems they got a little to eager in their rush to smear that they forgot to fact check. Its called a "Deployed HeroBracelet" and HeroBracelets made one for her and Joe Biden.

The best part is that bracelet isn't even black.

I can sort-of understand a momentary "What the…" reaction, but he went way past that.

It seems the bracelet would be OK with Robinson if it were another color. Sheesh. I suppose a schoolgirl who ties her ponytail with a yellow ribbon is disrespecting the Viet Nam dead? And red should only be used to honor those who died at Flanders Field?

So not only do libs not read, they also can't use google? I thought these guys were supposed to be the brilliant elite?

I don't suppose these people were complaining when Obama tried to get photo ops with the families of fallen soldiers. In comparison, a bracelet is a small thing.

Just Put Sarah Palin through an airport scanner, print it out the scan as they did of a celebrity at Heathrow Airport,and have copies made in a limited, numbered edition. Now so many more people will have all of the "inside" information about Sarah Palin. We have the technology. Let's use it. Now everything will be known about her and we can be spared examination of her palm, her jewelry, her wardrobe and how much it cost – all of it. This is just another way the liberal media is trying to take her down – by even being bothered about all of this. The only time Obama came in for criticism about his "jewelry," it was over what he was not wearing – a flag pin on his lapel. Of course he broke dress code when he went to Kenya and wore native "Muslimish" garb. However, generally, we don't sweat the details with the men in politics.

And just what would Daily Kos know about "the norms of military families" anyway?

For a supposed dunce, Palin seems remarkably adept at doing/saying innocuous things that provoke the left into making utter fools of themselves, time after time after time.

The comments on Crooks & Liars is almost worth the show. Here's one now!

We must have been writing simultaneously. I must say that I wish this sort of jump-to-nasty-conclusions would stay where it belongs: on right-wing blogs whose only acquaintance with facts are when they're chucking them in the wastebasket. We oughta be better than this.

What makes you such an effective blogger is that when you decide to take a Leftie down, they ain't getting up. And you rarely, if ever, engage in ad hominems. Before you publish your posts, you have the facts lined up on so there is very little room for dispute.

I'm glad you are on our side. Well done.

I am still following you and I enjoy your Blog, that is why I linked you… http://governmentmess.blogspot.com/2010/02/conservative-blogs-fighting-for-truth.html

keep up the great work!

If Palin had any color bracelet but black, they would have called her racist!
.

Wearing a bracelet is "horrifying" but laying across the unmarked grave of your son for a photo-shoot, not so much. (Cindy Sheehan)

Thanks for doing the legwork on this one!

the comments over at crooks and liars were disgusting! i can't believe they've even managed to sink to a new low.

Hm. Think we need to have a contest for "Most Outragous Jump To Conclusion" out there in the blogosphere?

Something like: "In that picture she's wearing one ring! Made of Gold! That must mean she's the Ringbearer, and is planning on turning all of Middle Earth over to Saron!"

The sad part is the people who would win the award are *serious* in their delusions, which is not nearly as funny. Just tragic.