Where Have We Seen This Gesture Before?

Where Have We Seen This Gesture Before? 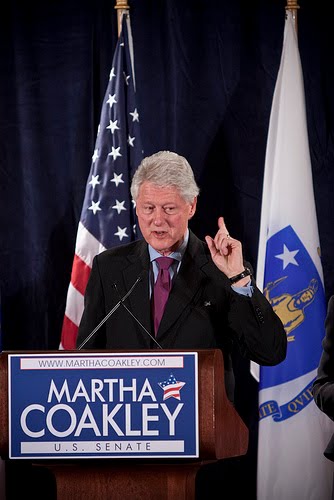 Yes, I remember it well. But in this case, I'd believe him. I'm CERTAIN that he didn't have sexual relations with this woman.

I like and respect Bill Clinton, voted for him twice. He is up there mainly because Coakley stood by Hillary and so he is supporting those who stood by Hillary while the democrats backstabbed Hillary.
And I say this as a democrat. And watch wewillnotbesilenced2008.com and you will see just how much fraud there was, seniors locked out of causus… etc. Absolutely disgusting.

BUT, I wish Bill Clinton would stay away, he has no idea that democrats like me are phone banking and contributing to Scott. While I am a lifelong registered democrat, I am not a loyal democrat, I am a loyal American. I oppose all the socialist job killing nonsense that is comning out of DC.

I am working hard to elect Scott, and come november will be working hard to support true patiots in the tea party/ conservative movement, even though with who I socially disagree, but agree with them on fiscal policy/pro-America policies and setting this country right so it can grow again.

Tim – We did not think people like you existed – Thank You.

Our family donated to Brown 2x, 1x b4 he became a sensation – that was the 'hope' donation and then again when we saw he could win – just like McDonnell and Christie. That was the 'change' donation 🙂

Sorry about the Pats in the playoffs

One interesting thing about Clinton is his arguing that the left adopt the Tea Party name. It's interesting, very left, very Alinsky. It won't happen . . . or work, but it might have last year, around late summer/early fall.

North Virginia Patriot there are many like Tim who are doing the same thing.

Whoa. Maybe it's just the picture, but, boy, has Bill aged. We're the same age, but he looks 10 years older. Take a vacation, Bill.

So, the United Nations special envoy to Haiti, appointed last Spring to that position, prioritized by spending absolutely critical time traveling up to Massachusetts in order to engage in some politicking for the disastrous campaign of a loser?

Well, I guess now that the POTUS today named Bill Clinton and George W. Bush as the co-chairs of the United States relief effort, it will give him a bit of political cover in that regard.