Warning: This Politico Story Has Nothing To Do With Reality

Warning: This Politico Story Has Nothing To Do With Reality

My new favorite source of screen shots has outdone itself, with this post and headline The first senator of the reality show era: 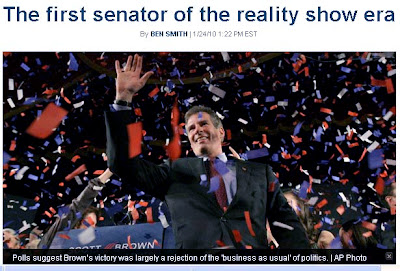 The text of the Politico post has nothing to do with reality:

Brown’s arrival reflects a fundamental change in American politics, the most complete embodiment of an ethic shaped by reality TV in which there’s no such thing as overexposure and no real line between public and private….

The Brown family reality show isn’t the slick “Real World” or the freak show “Jersey Shore.” Boston political commentator Jon Keller describes it as more “Table for 12,” the new show that seems set to inherit the larger-than-life, middle class normalcy after “Jon & Kate Plus 8” spun out into tabloid sex scandal. The Brown’s live ordinary lives, only entirely in public, in the embodiment of the ordinary, middle class Boston suburb, Wrentham.

In reality, other than a 25-year old Cosmo photo shoot and music video, we really didn’t know much about the Brown family. Ayla was on American Idol, but so what? Mrs. Brown (Gail Huff) stayed away from the campaign because she was a TV news reporter, and her old music video only came out of hiding after the election.

The real narrative of this election was the issues-based campaign Brown ran. Brown campaigned on being the 41st vote against Obamacare, cutting taxes, and strong anti-terrorist policies.

There was nothing “reality show” about the Brown campaign. So don’t try to “Palinize” Brown and his family after the fact.

How bizarre. Of all the "readings" of Brown's win I've read, this is by far the most . . . bizarre. Heck, it even beats Dean's assertion that Mass voters were sending secret messages in their vote for Brown that we are really (secretly) in support of the public option on which Coakley ran.

And the machine starts to grind… I'm glad you picked up on this.

Bizarre, is right. Wait, not really, this is the left's M.O. "No, it's not about the issues. Nothing to see here, just some B-list celebrity wannabe." Yeah, right. Keep it up. Go ahead. See you in November.

Thank you for calling out these hacks. Remember the phrase "Not your Daddy's fill-in-the-blank" popular for a couple years? Well it didn't take Politico six months to turn into their Elite-Lib-Beltway Daddies' same old, same old.

Keep an eye on the DailyCaller.com – Tucker Carlson's brand new site. I think it's designed to directly answer Politico… in an equal and opposite way. So far, so good…

When the left wins it is always about the policies, when the left loses it is always about personalities. They are sooooo predictable. However, I wonder why, when Reality TV started oh like fifteen years ago, that Bill Clinton and his wandering wazoo, was not considered to be the first Reality TV star? Or that even last year's election of Obama was the media's version of Survivor-how many liberals does it take to vote sane republicans off the island and vote in Mr. Personality?
No buyer's remorse there, huh, Politico?

They will say anything to minimise the Brown victory. Good, let them wallow in their bliss. We'll wake 'em up in November.

BTW, heard of this Ellie Light person or persons yet? Might wanna check my blog about this new internet ObamaTroll making the rounds.
http://reluctantpatriot.blogspot.com/2010/01/ellie-light-astroturfing-trolls-for.html

That's funny. I could have said the same thing about the Obama presidency.